I was SO excited for my trip to San Francisco last week…until I started feeling sick the night before. By the morning of my departure, my sore/scratchy throat had developed into a full-blown cold, complete with aches and congestion. Great.

At least I had Departures to keep me company. (The website is lame but the print magazine is superb.) 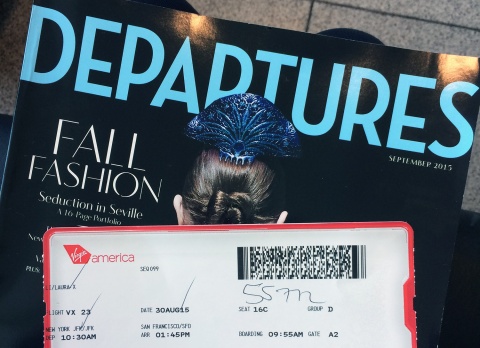 Normally when I fly, I prefer to sit by the window because I don’t use the bathroom often, but I had booked my flight on Expedia and they didn’t allow me to choose my own seat. At the airport, the guy at the counter said the only available window seat was all the way in the back, so I decided not to move.

Luckily for me, by the time everyone was on the plane, the two seats next to me were miraculously empty despite the rest of the flight being full!

One straggler came aboard at the last minute, stopped by my row, checked his ticket and kept on walking. I cheered silently and envisioned lying down to sleep peacefully…until the flight attendants decided to move the guy back to my row for whatever reason!

So much for my idyllic plans. Without a window to lean my head against, I barely slept at all. It was my first time flying Virgin economy, and I was astonished to discover that they weren’t going to feed us at all on the six-hour flight. Not even peanuts! Food was for purchase only. That just seems inhumane?? And certainly makes first class look extra enviable…

After a sleepless flight of endless shifting and nose-blowing — I wasn’t sure if my sore butt was from being sick or being old — I took a taxi to Kaiti’s place downtown. I noticed that the door of the car had a little mirror, which I assumed was to prevent passengers from hitting cyclists on the way out? Pretty cool. Never seen it in NYC before. We just get a sticker that says “Look before you exit.”

While Kaiti was busy cleaning her room (heh), I spent the afternoon trying to regain my strength. By the time we rolled out around 4 p.m., I still felt like a zombie but was excited to reunite with old friends.

We headed for the Mission District, and I took my first (and only) ride on the BART. The train itself was fine but the process of buying a ticket was a hassle because the machines don’t take credit cards. Plus, while we were trying to figure out the machine, some Latino dude at the one next to us kept looking at us like he had a question, but we couldn’t understand what he was saying until he walked away, angrily muttering “fucking Chinese.”

I was fuming but barely had the energy to walk, much less quarrel with strangers.

As Kaiti and I had both skipped lunch, we were famished way before dinner, so we stopped by Pancho Villa Taqueria for some pregaming AKA one taco per person plus an agua fresca for me.

Then on our way to our actual dinner at Burma Love, I randomly bumped into this guy Albert, whom I know from back home in Chicago. This is not the first time it’s happened to us, which is made weirder by the fact that we’re more acquaintances than friends. Other chance encounters with Albert:

And now again in SF, where he had just recently moved. Amazing.

Anyway, we finally made it to dinner, where I got to catch up with old friends! I hadn’t seen Betty in the longest time (since 2010!) so it was really great to meet up again. 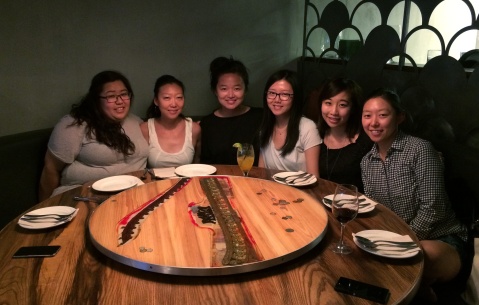 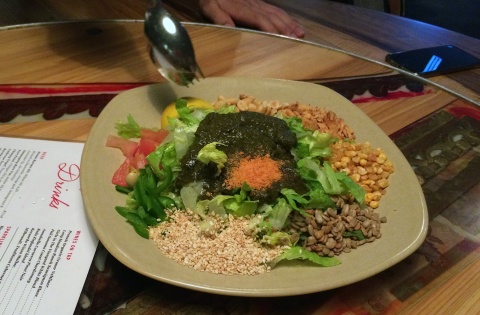 Though my body was hungry, my cold decimated my appetite, so I just nibbled on our food. The only picture I got was of Burma Love’s famed tea leaf salad, made with fermented tea leaves (the dark goop on top). It tasted kind of normal to me, haha, because I couldn’t really taste much at all!

Afterward, we wandered around — laughing about Vicks and toilet paper — until we wound up at Dandelion Chocolate, from which Yawen had requested I bring back some 70% bars for her. I guess they make their own small batches of chocolate or something; I was too sick and tired to educate myself on their process.

Took this on a different day, which is why it says “closed”

Kaiti & me posing with cocoa beans 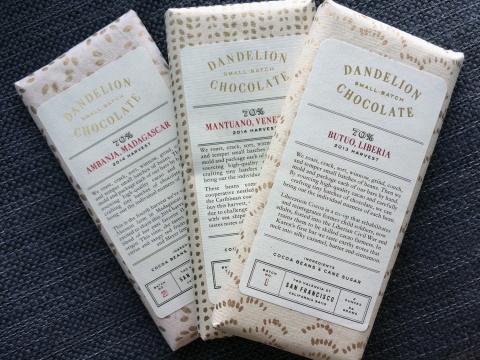 Bought these for Yawen

And that was our night! I couldn’t wait to get back to Kaiti’s place and crash. It’s awful to start a vacation at the peak of sickness!

§ 5 Responses to San Francisco Day 1: The Agony & the Ecstasy

You are currently reading San Francisco Day 1: The Agony & the Ecstasy at auradis.