I didn’t have definite plans for the afternoon, which is why I somehow agreed to the grueling hike over and up to Coit Tower from the Ferry Building (I think Kaiti was trying to kill me). It’s only a mile from the Ferry Building, but the last bit consists of 400 stairs, and I really thought I was going to die. I would’ve been fine if I weren’t sick, but alas, my body barely managed the climb. 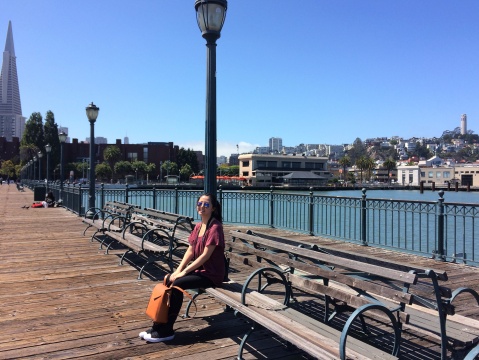 Fresh-faced at the beginning of our journey 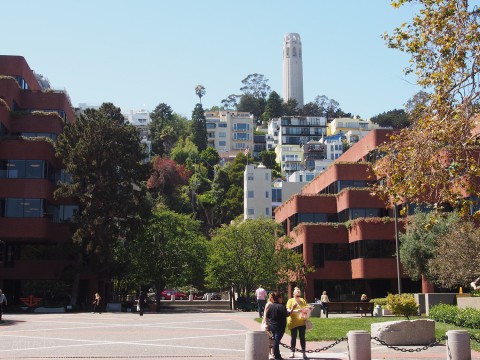 Halfway to the tower, but still so far away T__T 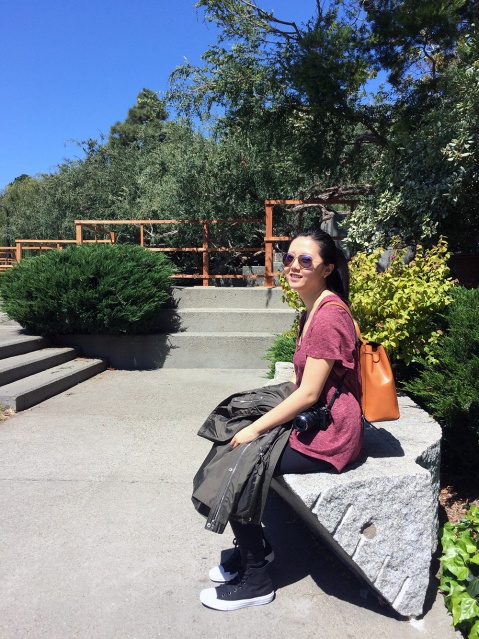 I took a lot of breaks LOL

Blackberries on the way up

The views at the top of Telegraph Hill were a small consolation. The bottom level of Coit Tower had a cool wraparound mural and small gift shop. We didn’t go up the tower elevator because we didn’t want to wait in line, and sadly, we did not see or hear any parrots. 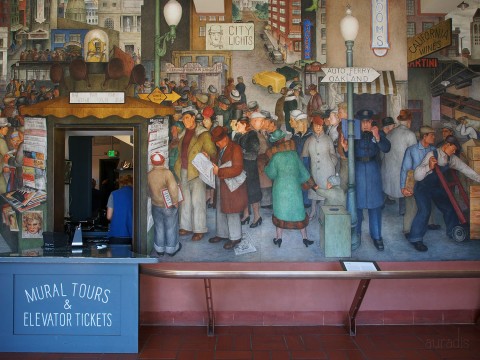 Curvy Lombard Street in the distance…yes we walked there too

I wasn’t hungry at all, but Kaiti insisted we go to her favorite pizza place, Golden Boy, though first we stopped so I could get a pineapple juice thing at Tacolicious. The pizza was quite good, though I only had a quarter of a slice: nice chewy crust and not too much cheese.

And because we apparently hadn’t had our fill of uphill walking, we decided to stroll over to Lombard Street and walk up that too. I wonder what it’s like to have your front lawn teeming with tourists all day long. Must be awful! The houses were cute though. 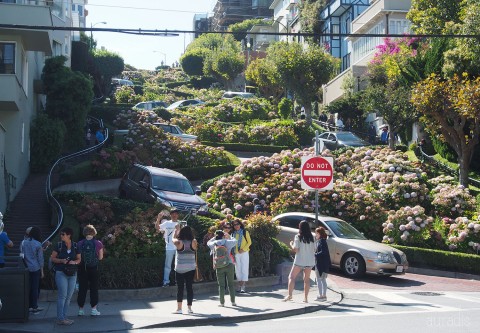 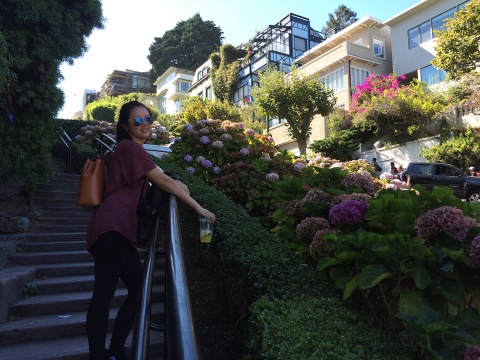 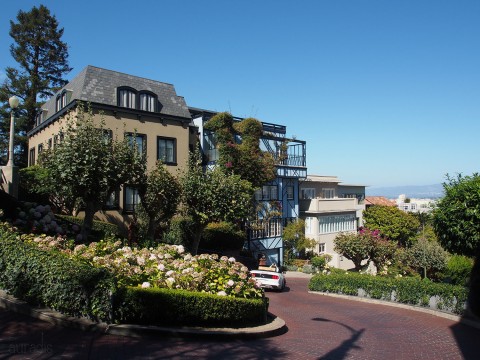 If we were smarter/less masochistic, we would’ve taken a cable car to the top of the hill and walked down. Look at all the freaking walking I did! This doesn’t even account for the slopes!

I guess it’s a good thing we got so much exercise because our next destination (via Uber, mercifully) was dessert #3 at 20th Century Cafe, which I read had a phenomenal honey cake.

The cafe was cute — and also old-timey Russia-themed — and the cake was indeed tasty, with a very strong taste of honey. What I found charming about a lot of the bakeries/cafes we went to that day was that each place had a little self-serve water station. Never really see that in NYC.

While walking around Hayes afterward, we passed by a tiny park, which contained this striking art installation: The Temple at Patricia’s Green. There was writing all over it, so I added our names. 💖 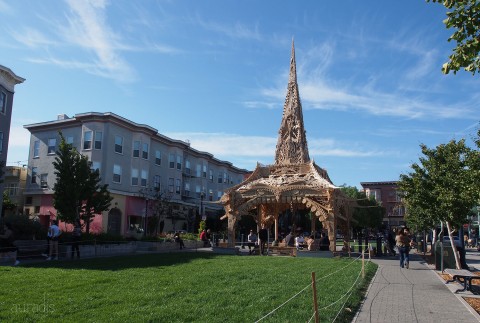 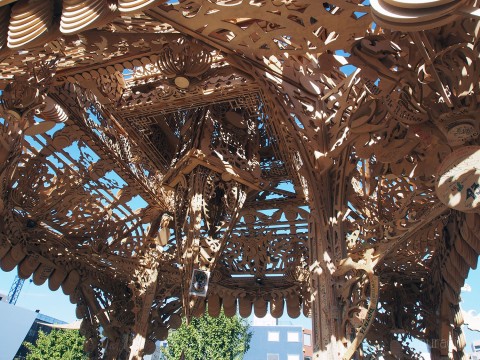 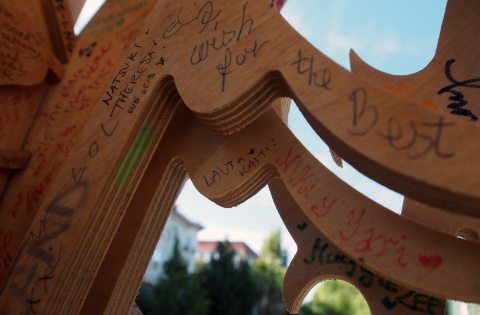 Nearby was Smitten Ice Cream, which was on my list of places to try, but I had already had enough sweets for the day — I know, blasphemy — or at least needed something salty/savory after the honey cake.

We then made our way to Alamo Square to see SF’s most famed row of Victorian houses. I had seen stock photos of the “painted ladies” before — I didn’t know what Kaiti was talking about initially because “painted ladies” has a very different meaning in New York in recent weeks — and expected the houses to be very colorful, but actually their colors were quite muted.

Again, I pondered the downsides of living in a frequently photographed house. Here’s a quote from a resident from NPR: “Living here feels like Disneyland at times. Everyone’s outside taking photos and looking at the house, so you feel like you’re inside an attraction.”

At this point, around 5:30 p.m., I was nowhere near hungry and just wanted to go home and sleep, but Kaiti wouldn’t let me (slavedriver…) so off we went for a sushi dinner at Nara nearby. 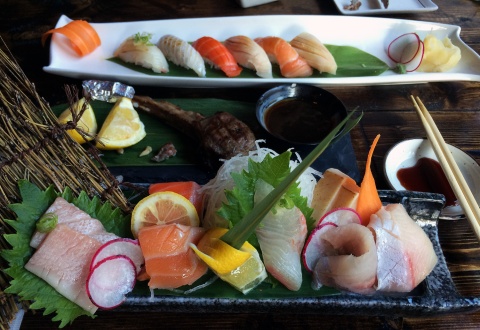 The sashimi was pretty good. I was astonished at how large the uni pieces were though; I don’t think I’ve ever seen them so big! It’s not a matter of location, either, because pretty much all urchin served in NYC and across the country comes from either Santa Barbara or Japan. (Unless you go somewhere like Upstate where the uni is randomly from Maine…)

Anyway, since we were right around the corner, Kaiti decided that I couldn’t miss my chance to try San Francisco’s famed Bi-Rite ice cream. I groaned at the prospect of shoving more food in my face, but managed to soldier on. 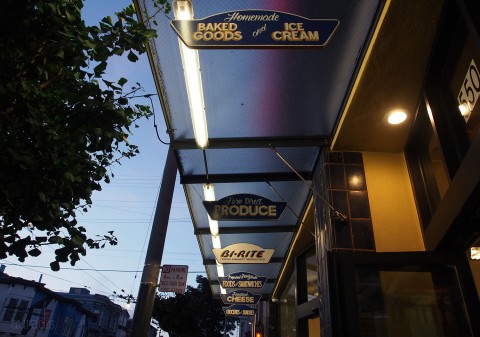 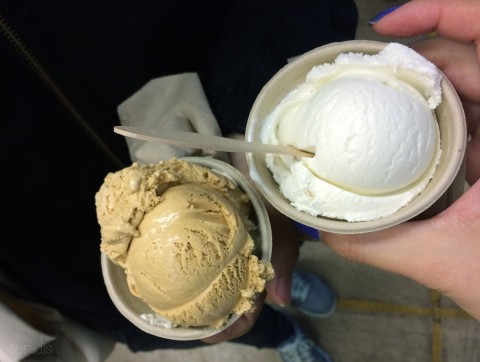 I got honey lavender — yum! After that, though, I was really done for the night. 😲

You are currently reading San Francisco Day 3.2: Walk, Eat Until You Die at auradis.