I went to my first press event today. It was in Hong Kong’s most prominent building, Two IFC Tower, a luncheon for the launch of a French beauty supplement brand. Being a newbie, I didn’t want to be late, so I got there 10 minutes before the event was supposed to start. I was the first one there: The team was still setting up and rehearsing. So I found a nook and perused the press kit, which included samples of their product — a definite bonus of working in the industry. (Who doesn’t like free beauty pills & a free lunch?)

The event started 40 minutes later than scheduled, which I suppose is how things are done in Hong Kong. One thing I appreciate about Americans is how punctual they tend to be. As relaxing as it was to be out of the office for three hours, the wasted time is a bit extreme in general.

The setting was a fancy French restaurant overlooking the harbor. Lots of waitstaff flitted around pouring Evian from glass bottles as a multitude of cameramen and tech guys (yes, they were all male) prepped the room. We guests sipped on champagne flutes of one of the brand’s products, a drink that supposedly helps with slimming. (I would’ve gulped that stuff if I didn’t have to pee so badly throughout the whole thing.)

Taken with my crappy Blackberry camera

I happened to sit next to a girl who also happened to be a first-timer. She was a 3rd-year journalism student at HKU (practically my alma mater!) who was also working as a reporter for Sky Post. My responsibilities at the event were pretty simple: Hand out your business card and grab the press materials. My new friend actually had to interview the spokesmodel, whom I’ll get to later.

The event began with an introduction, which led into a speech from the founder of the brand, a French lady who reminded me of my fabulous French professor from Mizzou. As we nibbled on warm bread, she told us about the importance of nutrition and inner beauty, which I absorbed and appreciated for its practical aspects. I especially liked when she explained that the plants she used for her products, specifically grapes and tomatoes, were subjected to harsh conditions such as extreme sunlight or lack of water/fertilizer so that they would produce the strongest, most resilient compounds, which the brand would then use in their supplements. She also stressed the importance of taking the supplements in conjunction with a healthy diet and lifestyle. Her English had a strong French accent, and I wondered how difficult it was for the native Hong Kong press people to understand her.

The way the French lifestyle is sold to the rest of the world is interesting. For me, it started with French Women Don’t Get Fat, which I actually borrowed from a friend in high school so I could type up all the recipes inside (yes I actually did that) and promptly proceed to actually use one of them. (Stewed plums or something like that, which my brother and I ate when my parents vacationed to Seattle for a week.) Then there was the Dukan Diet, which seemed to me like a glamorized redux of the Atkins Diet. More recently, we’ve been bombarded with Bringing Up Bébé, which has me skeptical but curious to read. So is it really better to live like a French woman and take French pills? Well, at least they’re not as smelly as Chinese herbs. The tagline for this product was something like “French women never get ugly,” a claim I don’t have enough evidence to dispute or believe.

After that, the MC took to the stage with another random guy, a makeup artist and another woman who was getting her makeup done. It was all done in Cantonese so I didn’t understand any of what they were saying or what this had to do with the brand launch. I focused on my food instead, which was all very delicious. I couldn’t take any photos of it (how unprofessional would I look lol), but I did snag the menu:

As someone who has become accustomed to eating cheaply in Hong Kong, the meal was exquisite. The salmon — omg — I don’t think I’ve had better anywhere. It was so tender and rich…and the DESSERT. The concoction was pretty much a fancily decorated little brick of soft chocolate with raspberries & ice cream that tasted utterly divine. I was so satisfied afterward, both physically and emotionally.

After another Cantonese presentation about the specifics of the products, Patina Lin came out. She’s a model (& occasional actress) from Taiwan, where the brand debuted last year with much success (apparently). For the half hour before the event began, I had been watching her promo video for the brand as it looped on the screens around the room, so I thought I had become pretty familiar with her face, but nothing could’ve prepared me for what my humble eyeballs were blessed to see.

The double doors in the back of the room opened slowly, and Patina dramatically stepped into the room in a flowing green gown and towering heels, strutting to the middle of the room and posing before joining the MC onstage. I think everyone was amazed. I, too, was dumbstruck with how…unrealistic a sight she was. Patina seemed to be impossibly tall, impossibly thin, impossibly gorgeous. Watching her flounce around on the beach onscreen couldn’t generate the same result as being a mere commoner in her physical presence. I’m not sure why I’m gushing so much, but that was my natural reaction, so I’m going with it.

That is also her face on the right.

Being from Taiwan, Patina spoke Mandarin, which brought the total language count to 3 — pretty impressive for a simple brand launch (perhaps not so rare in HK?). I was thankful because it meant I could understand 2/3 of the entire presentation instead of only half. The group did some more talking, and after meeting and shaking hands with the founder, I went on my merry way, arriving back at the office a full hour later than I expected. 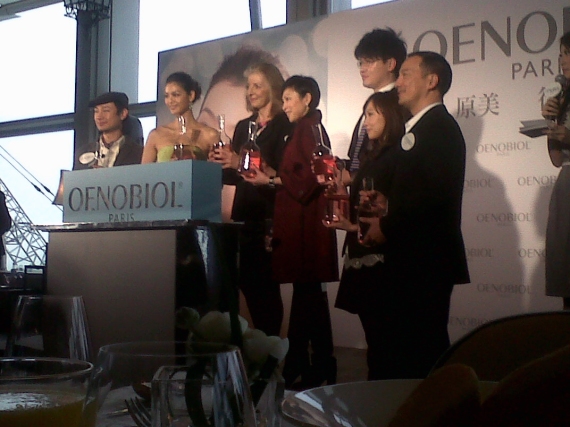 Holding bottles of the Topslim® drink, which they later poured into the blue box to fill in the brand name. Clever!

ETA: I’ve started seeing ads for this brand in the subway, Patina’s face (& bikini body) staring out at me as I take the escalators up and down. The funny thing is that these ads are almost always positioned next to the new Pizza Hut ads — what a juxtaposition!

You are currently reading In The Room at auradis.