And What Kind Of Freedom Is That?

For Valentine’s Day, a couple of friends and I decided to go watch The Lady, a movie based on the life of Nobel Peace Prize recipient and Burmese democratic leader Aung San Suu Kyi, starring Michelle Yeoh and David Thewlis (AKA Professor Lupin). It wasn’t my first choice, honestly; while I didn’t doubt that it would be good, I figured a low-key film like that could be equally enjoyed on my laptop without paying for the $11US ticket. In the end, it turned out to be a highly appropriate choice for the holiday. If it were still out in US theaters, I would urge you to skip The Vow or Beauty and the Beast 3D or (heaven forbid) This Means War — if you want a story about the depths of true love, watch The Lady instead.

Some of you might not know who she is. I admit that despite having watched the documentary Burma VJ last year in my capstone class and having read about the country once in an Amy Tan novel, I still get Burma mixed up with Tibet sometimes. I mean, these small, oppressed Asian countries — who can keep track of them, right? Wrong. Irresponsible, even. Some of you [and by you I mean me] might only know her as the woman who was kept under house arrest for years, which sounds like the most boring way to lead a revolution if you ask me. (/sarcasm)

Some of you might even know that Burma is also sometimes referred to as Myanmar, and its naming appears to be quite confused though I like to think of the latter as its slave name. Anyway, my point is that most people in America (I can only speak for us, but the range is probably more like everywhere) know nothing about the country or its present-day politics, so do yourself a favor and get educated. It’s as easy as watching a movie (or two: Burma VJ could be considered a solid chronological epilogue to The Lady and the whole thing is on Youtube!!).

The film follows Suu Kyi and her husband Michael from the beginning of her inadvertent political career to more recent times. It had two major themes: her love for her country and her love for her husband (and children). I found the movie riveting because I was only expecting the first one. But the movie showed a great deal of Michael’s side as well, which I felt was effective and relevant in drawing a more comprehensive portrait of Suu Kyi’s internal turmoil. Out of the total of the past 21 years she has spent in Burma, 15 of which were spent in strict house arrest (15 entire years in one house 24/7!!!), she and her husband could only meet a handful of times. The Burmese government only sometimes granted him a visa to enter Burma, and everybody knew that if Suu Kyi were to ever set foot outside of the country, they would never let her back in. Everything she had fought for, had sacrificed for, would be laid to waste. They didn’t have Skype. Internet. Cell phones. Only snail mail and the enduring hope that one day, all their suffering would come to fruition.

As someone currently dealing with the struggles of being in a long-distance relationship, I feel particularly sensitive to stories about long-distance love. And theirs is incredibly inspiring. (I would advise you to watch the movie and not read all the details on Wikipedia beforehand for the full effect of seeing whether they end up together. DUN DUN DUN.) The differences, of course, are vast. For one, I’m in Hong Kong because I chose to be. I could very well have stayed in the States if I wanted to, though of course it would still be long distance to some extent because there’s no way I’m going back to live in Columbia LOL.

One could argue that, yes, Suu Kyi did have the choice to return to England; in fact, the Burmese government would have been more than happy to accommodate that request. But it was a choice she could not make. (The dialogue from that situation is the source of the title of this post.) She couldn’t simply go home and leave her country in tatters. She couldn’t give up and relinquish all the years she had already spent as the face of a revolution. She couldn’t do it even to watch her two sons grow up, to accept her Nobel Peace Prize, or to be there for Michael as he battled cancer. She and Michael both knew that she was doing something far greater than their desire to be together, and she couldn’t just leave. So she chose to stay. 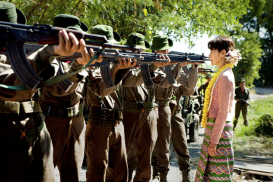 The movie elicited quite a few tears. It invited them, really; there’s no shame in crying over genuine human atrocities. Indeed, at a few points throughout the film, I wondered what drove the leaders of the Burmese military government to do what they did (last plug: Burma VJ deals primarily with the “Saffron Revolution,” named so because it was largely led by the country’s many saffron-robed monks, who were beaten, murdered and arrested with all the other protesting citizens. Killing monks!! That is damn low). I mean, how much evil must they have inside to be impervious to the suffering that they forcefully brought upon their own people? Why is it so hard to let go of power? Is it really that irresistible? What…what fuels these people, and where does their enjoyment lie?

Anyway, I could probably keep writing about this topic (must be the INFJ in me), but I have to go to sleep, so I’ll leave with a few superfluous observations.

1. Suu Kyi & Michael’s older son looked like Drake.
2. Their younger son looked like my friend Jack.
3. Speaking of their kids, it was hard to believe that two teenage boys could be so sensitive and well-behaved. I mean, sure, they bickered with each other, but every time they were reunited with their parents, they ran in for hugs and snuggles. The 13-ish-year-old continuously called his parents “mommy” and “daddy” without any sense of teenage rebellion — um, someone please tell me how to raise kids like that?!?
4. This movie makes me want to wear flowers in my hair forever & ever.
5. The Lady is beautifully produced story of true love. I urge you to give it a try if only to educate yourself on international issues.

§ 2 Responses to And What Kind Of Freedom Is That?

You are currently reading And What Kind Of Freedom Is That? at auradis.