Almost every time I go to Las Vegas, the first dinner is always at Kabuto Edomae Sushi. There’s already plenty of literature on why it’s a fantastic restaurant, so I won’t elaborate, but we’ve always enjoyed our meals here, and the price is really good for the quality, especially compared to similar places in NYC.

This time, though, I was accompanied by the burden of guilt. I had just read this fascinating and compelling article about endangered bluefin tuna, and I knew it was definitely going to show up more than once in the omakase. But I wanted to do my small part as a consumer and stop eating bluefin. So I had to steel my resolve before going so as not to chicken out. Think of the poor tuna!

It was mostly that I didn’t want to create a fuss at one of our favorite sushi restaurants. I don’t actually like tuna that much. Yes, fatty pieces of chutoro and otoro are objectively delicious, but I actually prefer leaner cuts of meat in general, and that includes tuna. I want to taste the flesh, not just fat. (I realize I’m definitely in the minority on this.) And when it comes to any kind of tuna, it’s just not as high on my list of loves as other things like giant clam, squid or amberjack. 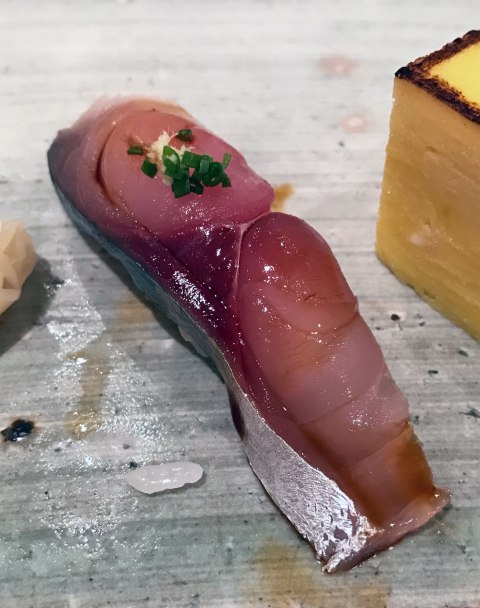 During the ordering process, when the waitress asked if we had any food allergies, in addition to telling her I preferred less rice on my sushi (so I don’t walk out stuffed and in pain), I requested that we receive no bluefin tuna.

As expected, she seemed perplexed. I think I had to repeat my request and tried to emphasize bluefin tuna, but I guess it’s likely that the only tuna they serve is bluefin. After she repeated our order in Japanese to the line of chefs, it caused a small hubbub among them.

I panicked. Did we just offend them deeply? Were we going to get blacklisted from Kabuto? Should I just not have said anything??

It was an agonizing 10 minutes of anxiety before our first course arrived:

Instead of two slices of tuna on the far left (I was comparing with the people sitting next to us), we received a bite of botan ebi, which I LOVE. And of course it was delicious and made me way happier than tuna would have.

I had zero regrets by the second course — was too busy eating to take a picture — which was a grilled platter, and instead of the usual seared, marinated tuna, we got grilled snapper cheek. It was extremely good: meaty and tender, with a hint of that bitter, genuine seafood flavor like when you suck on the head of a shrimp. It was bliss!

The rest of our dinner was excellent as usual, and we didn’t notice the lack of tuna until one of the final courses: the hand roll. This is pretty much always made with some sort of fatty tuna, but instead we got crab. It was still tasty, but not necessarily an improvement on toro, unlike our other substitutions. I was already full at this point so it didn’t bother me; I think J (a hand roll aficionado) was sadder about it.

But the point is we did it! And it was ok — better than usual, even!

Ours was a small effort, but I hope we can keep the momentum going. In the meantime, I’m saying goodbye to my last bite of otoro…

You are currently reading Hold the Tuna at auradis.