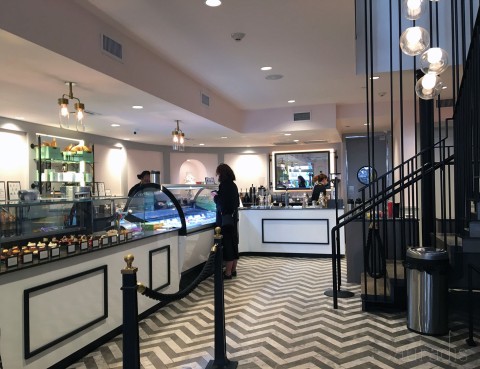 After spending the morning making an epic trek out to Bywater for barbecue, we parted ways for an afternoon of individual pursuits. Lucy went to the WWII museum, while I took a nap and Kaiti was supposed to go to yoga but ended up napping as well. Post-nap, the two of us decided to indulge our sweet teeth at Sucré, an adorable dessert shop nearby.

We probably went a little overboard ordering, as I was barely digested before our dinner a few hours later. Oops. In the moment, though, gelato and a s’mores skillet sounded like a great idea! 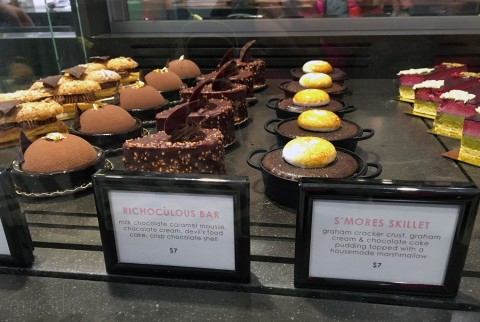 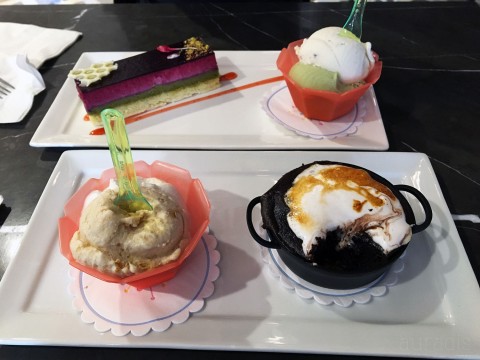 I ended up in a lot of pain later from overeating, but in the moment, they were most certainly delicious. Thus I was still full by the time we got to the famed Commander’s Palace, all dressed to impress due to its strict dress code. 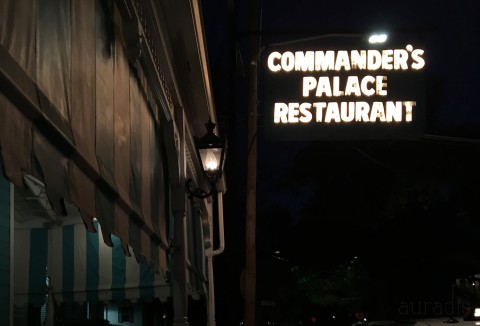 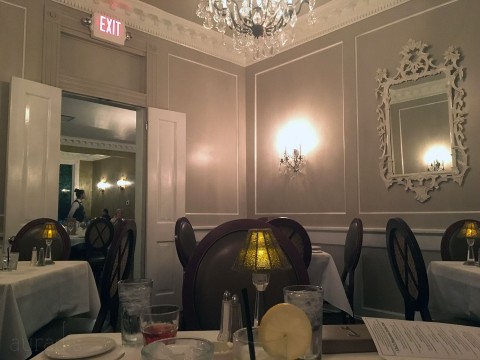 Sadly, we didn’t get to see much of the fancy mansion or its courtyard because we got put in a side room that had its windows covered.

Our first course was the turtle soup, which I had never had before. It was good but not my favorite — glad to try it but probably wouldn’t order again. We also got the Commander’s Palace butcher block, which came with a variety of yummy meats, paté and dips.

For my entrée, I ordered the pecan-crusted gulf fish, apparently one of their signature dishes. It was amazing! The fish was incredibly tender, and I forced myself to finish it even though I was disgustingly full. We also got a side of crawfish tails, which was an unexpectedly generous serving, though it was less impressive to eat because it somehow didn’t have any flavor? 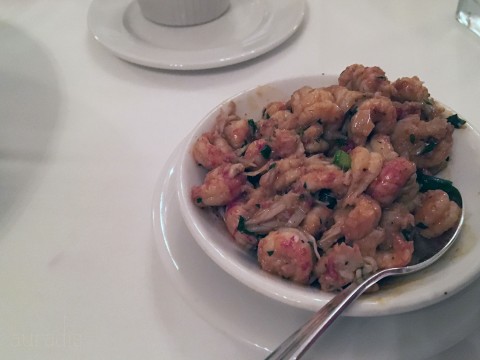 Breakfast was had at a random cafe near our hotel; I was recovering from the previous day’s eating and only had an omelette with some fruit. Somehow Lucy and Kaiti managed to eat shrimp and grits…what resolve! We then took a car over to the Garden District to do some shopping before walking to La Petite Grocery for lunch. 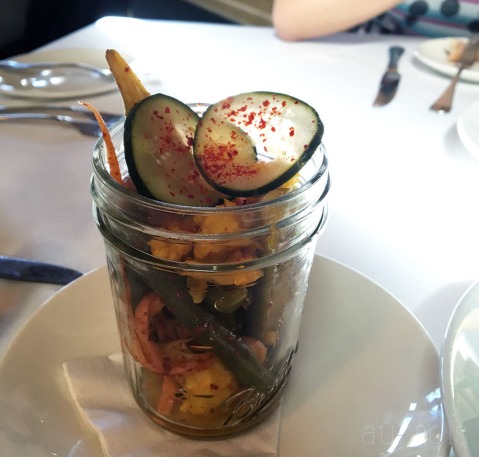 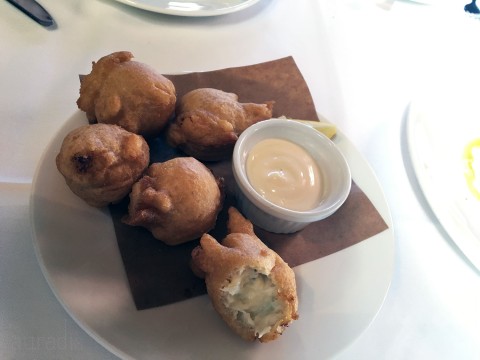 Having eaten only a little while before, we didn’t order too much food and just sampled some dishes. My two favorites were the pickle jar and the blue crab beignets. Yummmm. Somehow the other two still had room for ice cream after our meal, so we walked over to Creole Creamery for dessert. It’s very unlike me to pass on ice cream, but I was chastened by the pain of overeating from the day before, so I abstained. I’m sure it was delicious though!

After spending hours walking around in the afternoon (post to come later), we were finally famished enough to go ham on our last meal together! There are countless oyster options in New Orleans, but we settled Felix’s Restaurant & Oyster Bar, just a short stroll from the hotel.

Started with some gumbo and jambalaya, both of which were good but pretty salty. We also got a dozen raw oysters and two dozen char-grilled ones. The oysters were so big they seemed almost obscenely meaty? 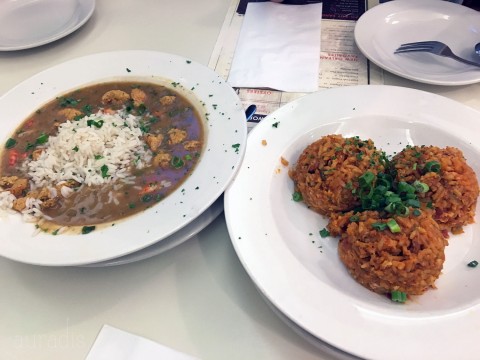 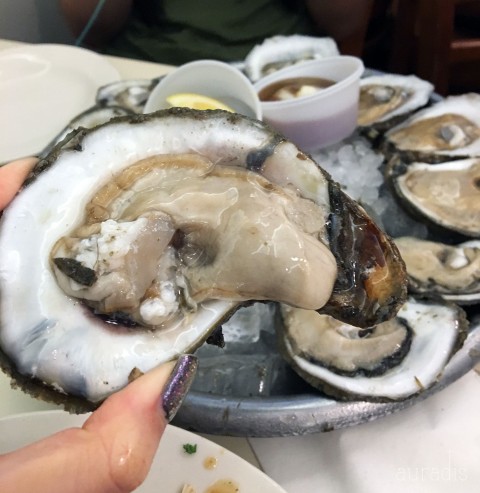 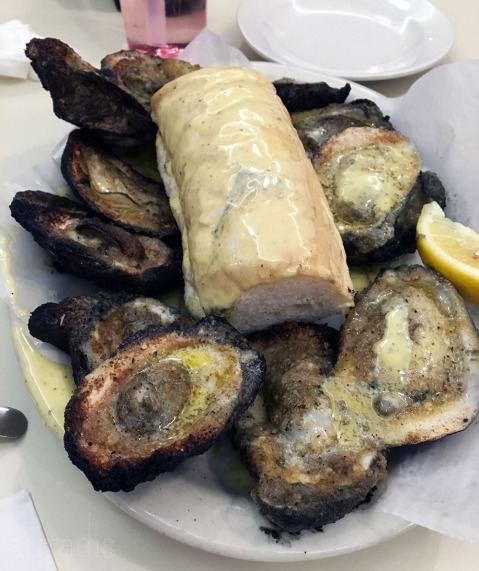 I don’t eat raw oysters, but the grilled ones were phenomenal. Apparently they’re drowned in butter and cheese, so no wonder they were irresistible. Of course, we ended with bread pudding, which was delicious though could’ve used a little less syrup. 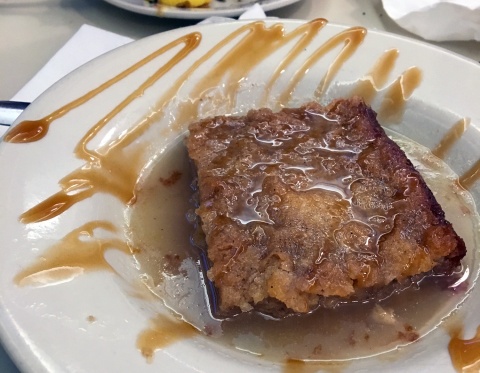 And that is how I gained 10 pounds of flab on vacation. The end.

You are currently reading Eating in New Orleans: Dessert & Oysters at auradis.