New Orleans Nightlife: All That Jazz 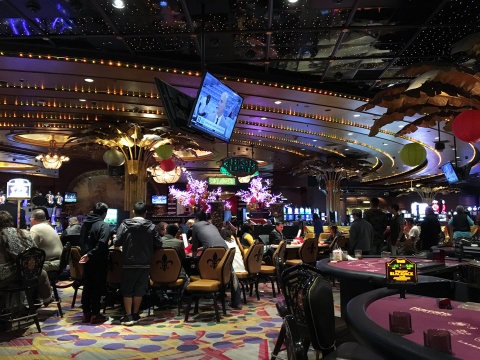 Our cab driver from the airport told us that New Orleans allowed one casino — Harrah’s — within city borders under some euphemistic law that refers to the establishment as a place of “gaming.” Hah! We took a short stroll through it one night on our way to the riverwalk; it was actually quite nice inside.

Harrah’s and the adjacent Canal Street were still bustling with activity around midnight, but the riverwalk was deserted. The nearby mall was closed, the fountain wasn’t running, and there were barely even any lights to reflect on the water. So we just took a picture of ourselves and left.

Ah, yes. Bourbon Street is a requisite stop for tourists, though we were glad to leave it behind after a cursory walkthrough our first night. Fortunately, we just missed Mardi Gras the week before, plus it was a Wednesday, so it wasn’t as rowdy as it could’ve been. Seeing the mostly empty bars selling sugary slushed drinks like Hurricanes and the mostly middle-aged people stumbling around was not appealing in the least.

We took refuge at 21st Amendment, a cute bar just off Bourbon that served tasty shandies, among other things. The band playing that evening was The Royal St Windin’ Boys with Ms. Jenavieve Cook, and we liked them so much that Kaiti and I both bought CDs. I particularly enjoyed the clarinet :)

After that, we braved Bourbon again to check out Deja Vu Showgirls, a strip club that hosts drag shows on Tuesdays through Saturdays. It was my first time seeing drag, and I loved it! Most of the queens had incredibly lithe bodies and some unreal (literally, but still very sexy) hips. Case in point, this gorgeous lady:

Most of our entertainment, however, came from watching the couple across the stage from us. They were probably in their late 50s. The husband would NOT stop hitting on and trying to grope the hostess (also a drag queen), who did her best to fend him off while still flirting with/insulting him, all while the wife took pictures and cackled at her way-too-amorous companion. It made for a hilarious show.

On Friday evening, we ended up returning to Bourbon and found it much more packed, with a lot more young people. But there were still plenty of old people as well! Guess the partying lifestyle never ends in the Big Easy?

Our destination that night was Preservation Hall, an iconic venue that welcomes all ages and is BYOB. We stood in line outside for 45 minutes for the 10 p.m. show. Even though we were the second group in line, we only managed to snag the last row of seats because of all the people who bought “Big Shot” reserved seating online for $45 -_- 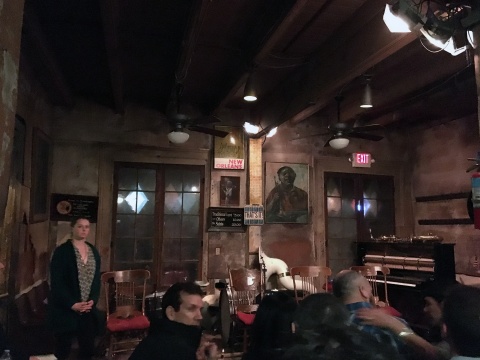 Well, I’m glad we only paid the $20 walk-in cover because while the show was good, they weren’t worth $45 for the measly 45-minute set. Plus they wanted audience participation in half the songs, like “You Are My Sunshine” and “When The Saints Go Marching In.” I mean, I didn’t pay to come in and listen to these other people sing! I felt like I was in church, haha.

The fact that they were the house band made me wonder how many times they had performed the exact same set and whether they were tired of playing the same stuff. I guess I shouldn’t hold it against them, but it was just a different feeling — more contrived than listening to a band that’s actually hustling for tips and CD sales.

Anyway, I imagined Preservation Hall to be some kind of auditorium, but actually it was just a room the size of any other bar, with a few rows of benches. I’m glad we went, but for more evocative live music, I preferred Frenchmen Street.

Every local we talked to cited Frenchmen Street a the city’s best nightlife. Every bar doubled as a live music venue. It’s actually quite a small area, a handful of blocks along one street. 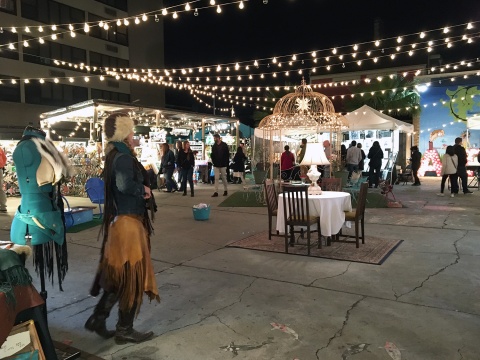 We first checked out the Frenchmen Art Market, which only operates in the evenings. It was a cute little affair, like a toned-down version of Brooklyn Flea. I bought this adorable print from artist Kersey Barrett-Tormey and hope to frame it soon!

Then we hopped next door to the venerable Spotted Cat Music Club, which was stuffed to the brim with people standing around for live music. (Bonus: no cover!) We made it just in time to catch the Jumbo Shrimp Jazz Band, who were fantastic and brassy. They sat in the window, which I guess is common for venues in New Orleans, and it was funny to see people walking by outside peering into the window like the band was some kind of product display.

After a few songs, the Jumbo Shrimp called their fiddler out, and together they played a really catchy song called “Caravan” that I can’t seem to find online anywhere. It wasn’t on either of the CDs they were selling either, or I would’ve bought one! Anyhow, the best part was that for the next song, the fiddler took out a saw — yes, the tool — and somehow played that with his violin bow. WTF? It sounded like alien music. Wish we had a better view so I could’ve taken a photo! 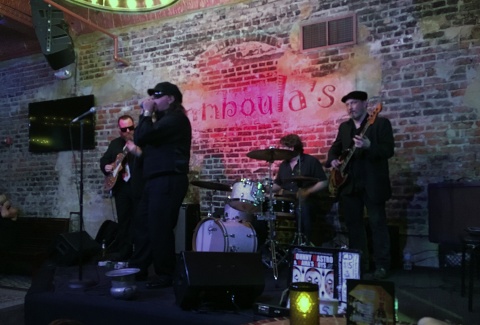 Our final stop of the night was Bamboula’s, a random selection on Frenchmen because we just wanted somewhere a bit more low-key. The band that night was Johnny Mastro & Mama’s Boys, with half the group in sunglasses for some reason. Johnny led the band on harmonica, and their bluesy music was a refreshing deviation from what we had been hearing so far. I definitely got all the live jazz I was looking for in NOLA!

§ 7 Responses to New Orleans Nightlife: All That Jazz

You are currently reading New Orleans Nightlife: All That Jazz at auradis.