On my second day in Singapore, CK took me to explore Chinatown, for lack of better things to do during the daytime. It seems weird that there is a Chinatown in a predominantly Chinese country, and I really don’t have much of an explanation for that. Our first stop was at a large Buddhist temple, where I was instructed to cover my bare shoulders and short skirt with the (admittedly nice quality) shawls that the temple offered for irreverently skanky people such as myself. 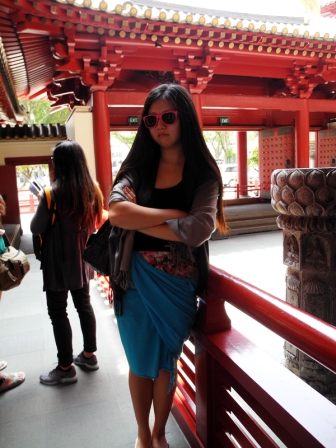 Grumpy at my modified outfit

I feel a bit guilty when I enter a Buddhist temple because I’ve pretty much forgotten everything I learned in the Buddhism course I took a few years ago, other than that the religion is both less wacky and more wacky than I originally thought it to be. I wonder what it’s like to try to live diligently by the Eightfold Path or even try to remember all the tenets of Buddhism. I’ve met very few (or perhaps none) authentic, practicing Buddhists my age, so I haven’t had much chance to discuss it, sadly.

Like any mega-church, this temple was clearly rolling in the dough. It was a five-story building with thousands of big and small Buddha statues throughout; there was a rooftop garden and even a small museum of artifacts and relics. And gold — or golden paint — was everywhere. 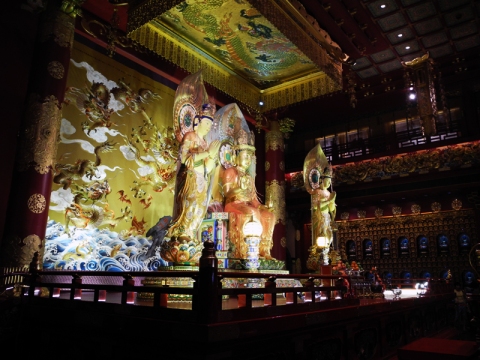 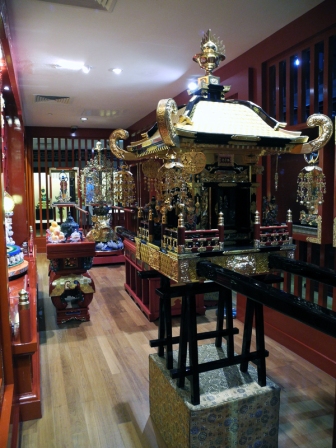 In the plaza between the temple and the mall behind it was a small Chinatown culture center, where you could go to get souvenirs and maps and information. The place was so nice that I wasn’t even allowed inside, not because of my clothing (lol) but because I was eating an ice cream sandwich. The snack, which I bought from a cart vendor, really couldn’t compare to American-style ice cream sandwiches, which I can honestly eat by the fistful.

CK and I both bought a pair of flip-flops in the aforementioned mall, and while doing so, I wondered why it’s so hard to find proper flip-flops in Asia (well, mainly Hong Kong and Singapore). Perhaps I should disclose that I pretty much only buy my flip-flops from Old Navy. They’re the bomb! Two pairs for $5, they’re light, they come in every color imaginable, they’re comfortable, what else could you ask for? The majority of cheap flip-flops that I’ve seen in HK and Singapore are made of that weirdly squishier foamy material, with thick plasticky thongs that aren’t comfortable around the toes at all.

Am I making sense? You guys understand the difference in quality that I’m talking about, right?? The only ones sold here that seem to come close are Havaianas — the products are prolific in Asia but freaking expensive for no apparent reason. Charging $20 for a pair of plain flip-flops?! Are they made of unicorn hooves and fairy dust or something?? Am I just a big cheapskate? Anyway, for the price of 2 pairs of Old Navy flip-flops, I bought a pair of cheap ones in Chinatown to replace the ones I bought to HK, which got infested with mold before I could wear them :(

We meandered over to the nearby Hindu temple, which doesn’t care about bare skin but does enforce bare feet! (In one of the pieces in the most recent issue of AsiaSpa Magazine — shameless plug for my employer — one of the writers got his designer Adidas sneakers stolen from the entrance of a temple in India, so let that be a warning to you when embarking on such adventures.) We burned the soles of our feet on the hot pavement and didn’t get to see much except the colorful statues. 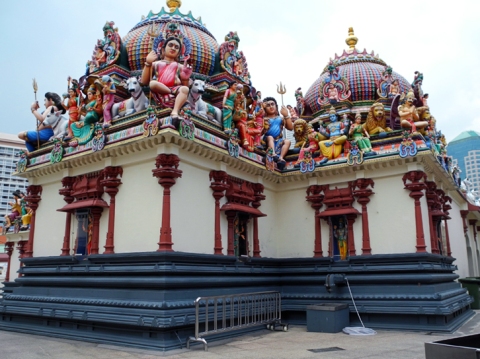 Chinatown had rows of restaurant stalls with outdoor seating, but we weren’t hungry enough to partake in anything. The heat and humidity were intense, and I didn’t feel like washing down my ice cream sandwich with greasy takeout. (If only I could exercise that same self-control everywhere else in the world.) The area is apparently under historical preservation, so the storefronts above ground level have retained their colorful colonial style. 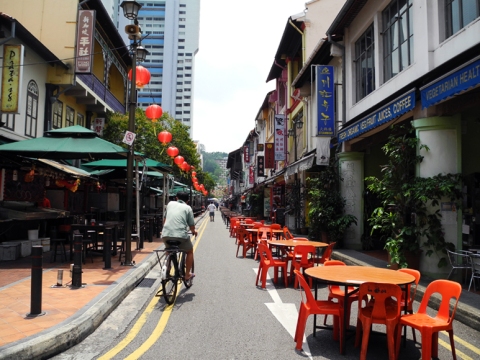 Not much business under the sun 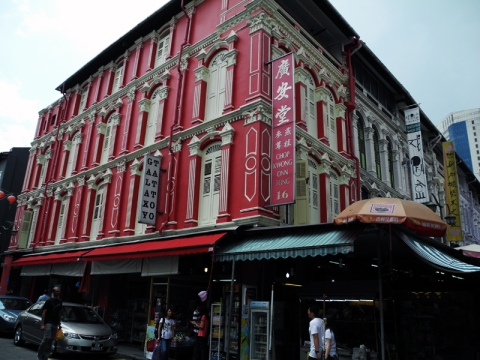 While CK and I were exploring the multitude of random souvenirs from the dozens of stores, it started to rain; we sought respite in another mall, where we discovered a small foot treatment place that offered the “doctor fish” I had always wanted to try! I think S$8 got us 15 or so minutes, which was more than enough time to get our feet and hands nibbled thoroughly. The experience was very unique — I’m not that ticklish, but the feeling of little fish kissing my skin was too much to handle at first. I couldn’t stop giggling and couldn’t even manage to stick my feet all the way into the water until the worker came over and shoved them in. It doesn’t seem like a big deal to have fish swarming around your ankles and toes, but in the moment, it was hard to fathom that these fish thought my dead epidermis was tasty. Uhhhhh…. 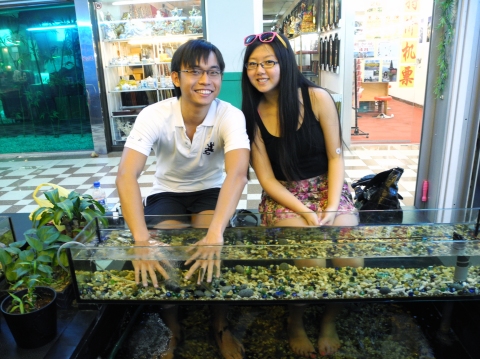 Afterward, our feet were very smooth and even seemed paler than the rest of our legs! Somewhat related: At some point during the day, while CK and I were traveling in his car, I pulled out my chapstick (sorry, lip balm) because I’m always applying and reapplying it. “What’s that?” he asked. It turned out that CK didn’t know what chapstick was because he had never used it because his lips never get dry!! Such is the power of Singapore’s humidity, apparently. As a borderline chapstick addict, I was flabbergasted. The thought of a chapstick-less existence causes me to nervously apply more chapstick. Chapstick chapstick chapstick okay I’m done.

Also: One thing that makes Singapore preferable compared to HK is that I don’t perpetually feel like an outsider when out and about. If salespeople don’t speak English, they’ll approach me with Mandarin instead of Cantonese! There’s something to be said about being greeted in Mandarin when entering a shop or restaurant. Being greeted in English is expected, and how I’ve lived most of my life. Being greeted in Cantonese (or any other language) always causes a bit of initial panic. But Mandarin is the nostalgic language of my motherland; the romantic tongue of my childhood and ancestors; the memory of hot, idle summers spent tagging along with aunts and uncles while trying to avoid China’s pervasive cigarette smoke and the gobs of saliva on the sidewalk. It is the sound of home.

Something else I pondered was the virtue of government-enforced obedience. Singapore is a very successful country in many ways; it’s wealthy, developed, safe, stable, and overall seems like a great place to live if you can tolerate the heat. But as I spent time talking to CK and his friends (and later, Benny), I began to get an idea of what it’s like to live in a “totalitarian” government. Sure, the government enforces policies that are ostensibly for the good of the people (which is frankly much more than I can say for the USA at this point), but you do have to give up a larger portion of your autonomy.

For example, in Singapore, you can only own a car for 10 years, with no exceptions — after that, either scrap it or sell it. Car tax, according to my friends, is ridiculously high, almost as much as the car itself. You can even buy a special red license plate that designates your car as a weekend-only car if you want to save money on fees. These measures are meant to reduce the car population in a country with such limited space, a responsible and reasonable strategy from the government, but restrictions that would seem suffocating to many. Regardless, if you want to live in the blessed land of Singapore, you’d better be a good person or end up getting caned or hanged.

I compared Singapore to places where the culture is more based on socially enforced obedience, such as the relatively homogenous countries of South Korea and Japan. I’m not particularly qualified to comment on the societies of any of these nations, but it’s interesting to think about. There’s no question in my mind that rote assimilation is expected in South Korea. As for Japan, I’ve read enough about expectations for women in relation to family life to draw similar conclusions, though I would be happy to be corrected by an expert in the field. In any case, how do the different cultures line up in terms of societal benefits and psychological effects on citizens?

Anyway, that evening, CK’s family was kind enough to invite me to his grandmother’s home, where their many relatives were gathering to celebrate grandma’s birthday (or something like that). I have a somewhat-documented penchant for hanging out with the families of random people (maybe because they usually seem much closer to one another than my own dysfunctional immediate family), so I appreciated the opportunity to observe his kinsfolk in their natural habitat. (Yes, I am a huuuuge creeper. Or some kind of aspiring sociologist. But they’re virtually the same thing.)

They were having hot pot for dinner, which is called “steamboat” in Singapore — what a cute name! I’m pretty sure CK’s relatives thought I was patently crazy for taking photos of their humble fare, but sometimes a tourist has to be shameless. 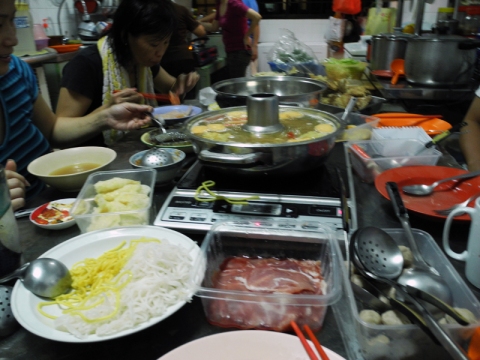 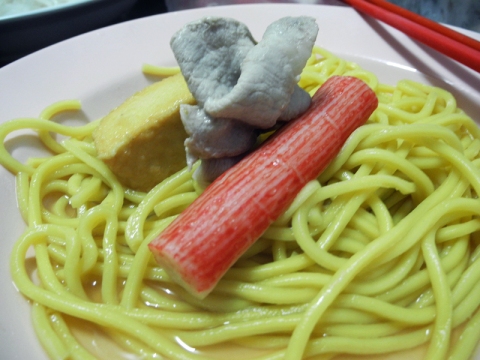 Never ate this kind of noodle in hot pot before!

The maternal side of CK’s family was big enough to fill up two adjacent apartments (my relatives in China used to own two next-door apartments too!), so much so that dinner was more or less eaten in shifts, first come first serve. In that kind of vibrant familial setting, it’s not hard to see why people would want to have a large family (despite the ever-present threat of overpopulation!!1!). As much as we Chinese people in America try to supplement our lack of present relatives by hanging out with other Chinese families, it’s not quite the same. 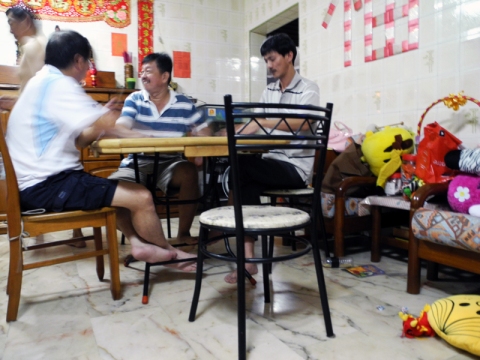 I had a great time interacting with CK’s family members (including his kooky white uncle from Oregon), watching Harry Potter on TV and later playing Wii with CK and his younger cousins. It’s not exactly what one envisions as part of a tropical vacation, but having been effectively orphaned in Hong Kong for a few months, it was a refreshing experience.

You are currently reading Singapore, Pt. III at auradis.