This post is three and a half months late, but I’m determined to crank it out, so here goes! (Click for parts I, II and III)

On my third (and final) day in Singapore, I was slated to meet up with Benny, a mutual friend of me and CK that I had also met while studying abroad in Hong Kong in 2010. I was actually a bit nervous about it because I had only met Benny briefly at a house party and hadn’t really spent time with him after that, so I hoped that the day wouldn’t bee too awkward or a waste of his Sunday. (I’m sure he felt the same way, haha).  Thankfully, we ended up getting along quite well, and I’m very thankful for his hospitality!

We planned to spend most of the day at Sentosa, an island resort on the south coast of Singapore. I got dropped off at the MRT station in the morning, where I mustered up some intrepidity and took the subway by myself to the Sentosa station to convene with Benny. For lunch, we dined at Toast Box on some traditional Singaporean grub:

END_OF_DOCUMENT_TOKEN_TO_BE_REPLACED

On my second day in Singapore, CK took me to explore Chinatown, for lack of better things to do during the daytime. It seems weird that there is a Chinatown in a predominantly Chinese country, and I really don’t have much of an explanation for that. Our first stop was at a large Buddhist temple, where I was instructed to cover my bare shoulders and short skirt with the (admittedly nice quality) shawls that the temple offered for irreverently skanky people such as myself.

Grumpy at my modified outfit

I feel a bit guilty when I enter a Buddhist temple because I’ve pretty much forgotten everything I learned in the Buddhism course I took a few years ago, other than that the religion is both less wacky and more wacky than I originally thought it to be. I wonder what it’s like to try to live diligently by the Eightfold Path or even try to remember all the tenets of Buddhism. I’ve met very few (or perhaps none) authentic, practicing Buddhists my age, so I haven’t had much chance to discuss it, sadly.

Like any mega-church, this temple was clearly rolling in the dough. It was a five-story building with thousands of big and small Buddha statues throughout; there was a rooftop garden and even a small museum of artifacts and relics. And gold — or golden paint — was everywhere.

END_OF_DOCUMENT_TOKEN_TO_BE_REPLACED

The morning after I landed in Singapore, I went out to have breakfast with CK, his parents and his twin brother. It was Good Friday, so the streets were super crowded with parked cars because the churches didn’t have parking lots, despite being mega-church status (apparently). The breakfast location was an open-air food court-type place, which is quite different from the usual IHOP experience but not unlike what you’d find at Chicagoland’s Diho. CK helped me order a plate of noodles, which came with fried fish and egg. 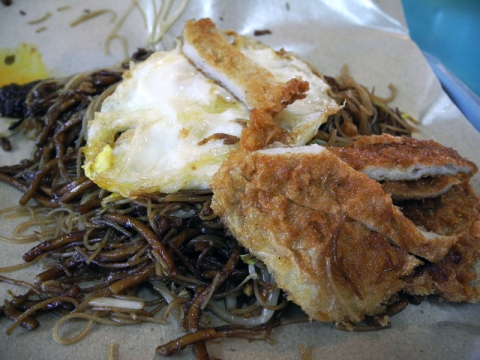 The whole thing was quite tasty but also very oily, which I don’t tolerate very well in the morning. It’s interesting because when I talked to CK about it later, he told me that he has a hard time eating dry food in the morning. I wondered if it’s because I come from northern China, which is known more for its bland fare (dumplings, buns, etc.). I mean, seriously, I could eat a whole loaf of bread in one sitting without any water, but I detest chow mein, deep-fried chicken and bacon.

Anyway. The good thing about the oilier Singaporean food I tried was that I could eat it without stuffing my face — I usually can’t help but gain weight while on vacation. (The constant heat and humidity helped diminish my appetite too. I love Singapore!) CK also bought me a curry puff to snack on. It was really spicy and really tasty, even four hours later.

Curry puff…come back to me!

After breakfast, CK’s brother dropped us off at the nearby MRT station, where we took the subway to Orchard Road, basically Singapore’s supreme shopping destination. It’s like Las Vegas strip if you replaced all the casinos and restaurants and brothels with malls and malls and malls. You can walk half a block out of one mall right into another one. The other amazing thing was that it seemed like half the malls were undergoing renovations or construction of some kind, meaning there will be even more stores. It was pretty overwhelming.

END_OF_DOCUMENT_TOKEN_TO_BE_REPLACED

I took this photo before even leaving Hong Kong Airport — as I sat in the lobby waiting for the two-hour window of permitted checking in, a young couple and their photography crew of three appeared across from me for a wedding photoshoot. This sight is pretty common in HK; I see at least one a week, usually on my way home from work. I guess there aren’t that many viable locations on this island to shoot wedding photos? Maybe they met in the airport or something. Either way, it was weird but cute. 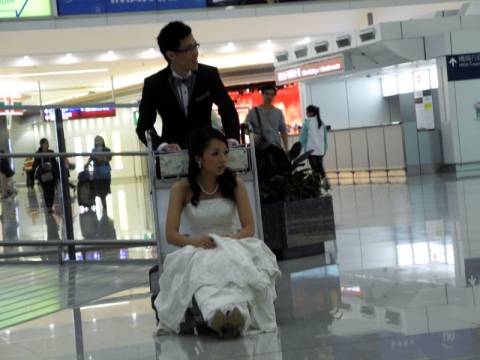 Whatever floats your boat. (Or plane.)

My flight was supposed to arrive at Singapore’s Changi Airport at 10:30PM on Thursday night. My friend CK, who was graciously hosting me, would still be working at the time, so we planned for me to take the MRT (subway) to Marina Bay Sands, where we could meet and grab a bite while enjoying the view.

As is typical with airlines (especially budget ones), my flight was delayed. We landed in Singapore at around midnight. I find it surprising that (I was told) Changi Airport is usually ranked one of the world’s best airports — whoever judged that contest obviously never visited the “budget terminal,” which basically means “cheap-ass building for our most worthless customers that is a mile away from the actual airport.” Frankly, it was comparable to the lilliputian Yiwu Airport.

Right after passing through customs, I exchanged some cash and called CK’s cell phone from a nearby pay phone. He didn’t pick up. Worried, I figured I should just try to find the MRT right away, so I exited the building and followed the signs to the free shuttle bus to Terminal 2, which is apparently where the MRT is located. It was seriously like a 10-15 minute bus ride (at night, with very little traffic!), which speaks to how far removed the janky budget terminal is (still bitter). At least I had this sign to amuse me:

I’m just not going to try to understand.

END_OF_DOCUMENT_TOKEN_TO_BE_REPLACED

You are currently browsing entries tagged with Singapore at auradis.