Okay, so I was not happy when I heard that certain cartoon figures were getting makeovers. The two foremost examples of this are Strawberry Shortcake and Dora the Explorer, whose new image was only recently revealed: 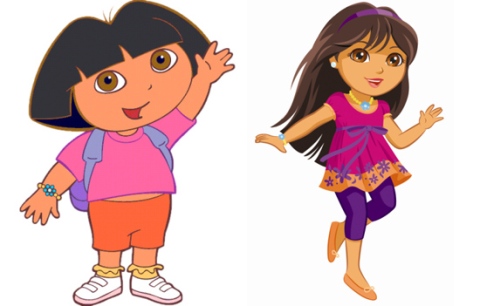 They indeed look like they have progressed from being five years old to being 12 years old. Is this really what little girls want, however? I don’t think a six-year-old would really care that much, given the choice, and if these companies think that preteen Dora will attract actual preteens, then they are seriously deluded. In a world where Hannah Montana & Jonas Brothers sit at the top of the heap and Seventeen magazine is actually read by 13-year-olds, these new figures will never make it big.

Clearly, these decisions were probably driven by a desire for profit. In time, though, children will grow out of their old playmates altogether and move on to something else, although I admittedly never grew out of my love for Pokémon, heh. I really hope that they don’t try to age these characters any further, though, otherwise we’ll be seeing “Dora Explores College!” bedsheets at Wal-Mart in a few years.

The biggest issue that most feminists take with the new Dora is that she will most likely be relegated to cleaner activities than exploring forests or whatever it is that baby Dora does. Will she prove to be a shallower role model, encouraging young girls to worry less about learning Spanish & talking to monkeys and more about, uh, clothes or something? Also, what will happen to baby Dora? What will our youngsters watch so that we can shield them from early-onset body image issues that are sure to occur when gazing at preteen Dora? [I’ve heard good things about Yo Gabba Gabba, and I am always a fan of Lazytown.]

Anyway, I’m half serious, half sarcastic about this whole issue. What interests me, however, is that most of the worry revolves around young girls. Yes, children are fragile, and the oversexed nature of everything these days is worrisome, but do boys not face these issues? Or is it that companies don’t even bother drumming up scandal about male characters because it wouldn’t even get anywhere?

You are currently reading Save Our Young, Virginal Girls!!!11!1 at auradis.