Last night, CH and I had the mind-blowing pleasure of seeing Lady GaGa perform at Chicago’s House of Blues, and it was worth all of the $73 I spent buying the two tickets on Ebay [plus the $15.20 I had to spend to express mail the tickets to my house after idiotically forgetting them in Missouri when packing for spring break].

Although I wanted to arrive an hour before the doors opened, scheduling conflicts and slow public transportation caused us to get there at exactly 6PM, when they started letting people in. The line was long but not horrendously so, and I was surprised to see that there were many who were older than us — I’m not sure who GaGa’s target audience is but I did expect to see more teenagers. The majority of the attendees were definitely either women or gay men, although there were a number of guys accompanying their girlfriends/wives or parents chaperoning a group of girls. There seemed to be a few hetero guys with other hetero guys, and maybe even some middle-aged folk without kids, but I couldn’t be sure.

Unfortunately, security took CH’s camera at the door so I don’t have any pictures, although we weren’t close enough to get any good ones — we stood right at the back of the mosh pit area on the steps so that we could see over the heads of all the tall dudes standing near the front [no fair!].

The opening band, Chester French, was not very good, but as the first opener, I don’t think anybody would expect them to be. I remember when I saw Mute Math open for David Crowder Band 4 years ago and nobody knew who they were, nor were they too interested. They’ve certainly grown in popularity since then. Anyhow, the lead singer of Chester French had good energy and the studio versions of their songs sound okay. I felt sorry for them since nobody wanted to clap along, and the best song they played was actually their cover of No Doubt’s Hella Good. Their drummer and bassist were black, which was cool.

The second opening band was The White Tie Affair, and they were definitely better performers and were better known [people actually sang along with their songs]. During one of the songs, they turned off all the lights except for some blacklights, which reflected off of their white clothing for a pretty cool effect. The most memorable part of their performance was definitely the lead singer, who kind of looks like a Ben Stiller Jr. — younger and without the slouch. At one point he went backstage and changed from his white t-shirt into a black leather jacket [yum] that he eventually took off, revealing nothing but his tight abs, causing all of the females in the audience to scream in delight. His pants were low enough to reveal most of his pelvic bone [YUM], and I’m sure I wasn’t the only one wishing for his pants to fall off, heheh.

After they finished, a white curtain descended to block the entire stage from sight, and a huge picture of Lady GaGa was projected onto it, drawing cheers of anticipation. The house DJ kept the energy up as the crew worked behind the curtain to clear the stage, and we stood and waited excitedly for the main attraction. We waited…and waited…and waited until our feet got sore and our knees were locking up from fatigue.

We waited for AN HOUR. Literally. CH amused herself by watching the group of teenage girls in front of us dancing to the music as if they were at a club [LOL]. I remember those days; now we’re too cool for everything unless we’re drunk, because only then do we have an excuse to act deviant.

Finally, the music stopped and the lights dimmed. The crowd clamored.

The curtain suddenly fell, revealing the Lady standing immobile in the center of the stage like a goddess with a microphone held to her mouth. I can’t remember when exactly the music started again, but from then on it was pure awesomeness.

Her hair was short, and it was clear that she prefers to go without pants because her legs were bare [or covered with fishnets] for the entire concert. Her costume was a kind of polygonal leotard with inflated hips, and when she turned around she displayed her uncovered derrière to the audience, which was just fine as far as we were concerned. That woman has a fabulous body and she knew how to work the crazy stuff she was wearing. GaGa told an anecdote of how she apparently almost got arrested by one of “Chicago’s finest” for wearing hotpants — I guess this was her reply to that incident, heh. No apologies from the Lady. I also remember that sometime during the concert she also said, “Will you guys help me repeal Prop 8 in California?” Random.

She had three male backup dancers, none of which were white [I can’t help but notice these things], and her DJ Space Cowboy was also on stage. Space Cowboy spun his stuff during some of her costume changes, and I’m pretty sure he was just doing his best to deafen the audience. When he wasn’t searing our eardrums, we got to watch these strange videos starring Lady GaGa as “Candy Warhol” on the movable LED screens.

Lady GaGa uses an unnatural [one hopes] stage voice that is not unlike the one that Paris Hilton uses in front of cameras. GaGa did say herself that her stage persona is a lie…and she kills every day to keep it alive or something like that. The concert definitely did not lack vulgarity. She was not shy about dropping f-bombs [“Put your f#cking hands up!”]; in one instance, she recited some more vague and loopy lines about the “future” with the index and middle finger of her right hand pointing out in imitation of a pistol and ended with a bunch of “-tion” words that I forget, one of them being “self-masturbation” [redundant, for the grammatically picky], at which point she curled her two fingers in a gesture that would most likely not make any sense to somebody who has never ummm visited a vagina. Anyhow — crude, but we ate it up.

After the first two sets, GaGa declared something to the effect of, “It’s getting hot in here. I’m going backstage and taking my clothes off,” which amused me because she was already wearing so little. She emerged in this: 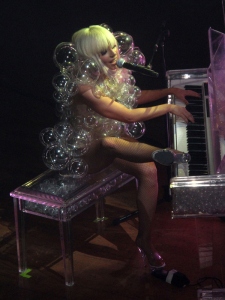 I had already seen it somewhere before online so I wasn’t as shocked as some, but it certainly looked uncomfortable. Her custom-built piano [which I believe was a keyboard built into a piano-like structure] matched her costume, which was fantastic and ridiculous. She had been singing live through the whole show, but she really showcased her powerful vocal chords [and musical talent] at the piano with her acoustic version of Poker Face as well as a new song, Future Love [best lines: “Would you be my f-f-f-future man? / I wanna f-f-f#ck you as hard as I can“]. GaGa banged her foot on the piano just like the picture shows, and muttered something about it being her the first time back in Chicago and flashing her “pussy for everyone to see” [although I am SURE she was not totally naked under those bubbles].

I am even more convinced now that she is the complete package — she can sing, dance, play piano, write her own music, design her own clothes [they can hardly be categorized as such sometimes, but she plays an undeniable part in the creative production of her own image], and she’s hot. Talented and brilliant — what more could you ask for?

When the last song finished and she took her bow along with her dancers and DJ, CH and I lingered in case she was gracious enough to give an encore. Lady GaGa did not disappoint. After Boys Boys Boys, she yelled, “I bet you all are wondering why this bitch hasn’t done Poker Face already!” to screams of approval, and the show ended fantastically with that song.

Afterwards, though my legs were exhausted from standing for 4 hours, I was exhilarated and invigorated, and CH and I ran through the rain all the way back to the CTA. Unfortunately, GaGa wasn’t selling any merchandise; CH and I were willing to pay for that stuff, but there wasn’t any. Which is just as well, I suppose, because I can’t imagine her sheer awesomeness being contained in a simple t-shirt.

I don’t think I could watch any other concert after seeing Lady GaGa because nothing else would compare. I could only upgrade from here, and the only performer larger than GaGa that I can think of would be Britney Spears [although I am ALWAYS willing to see Celine Dion perform]. Though, I wouldn’t mind seeing Pink in concert either. Or Leona Lewis. Hmmm I guess there are quite a few options left.

You are currently reading Haus Of GaGa at auradis.