As stated in my earlier post, one of my goals this winter break was to spend a maximum amount of time with my best friends, who all managed to be in the same place for the first time in four years.

Winter break goals #1: Hang out with besties at least 72 hours in a row

I’m not sure if we actually achieved that goal, but we probably came close!

During our first week together, we tried to communicate with each other by group texting via regular messaging, which fell apart when certain people’s texts would appear to reply to individuals but still be sent to the whole group somehow. Very confusing. We decided to start a group chat on WhatsApp, which was the best decision ever. Here’s a snippet of our delightful conversation:

It turned out the offender took two separate poop breaks in the span of an hour. What a champ.

The chat was titled so because the first weekend, we had a bit of trouble figuring out how to transport ourselves into the city as our available vehicles were no longer usable for one reason or another. We briefly considered taking the train, which would’ve been overpriced and annoying considering we were hauling presents/booze/sleepover gear. Desperate times…it was strange encountering teenage-level problems as 20-somethings. Fortunately Xixi was able to borrow her dad’s car to ferry us over. #suburbproblems

Later that week for New Year’s Eve, the five of us gathered at Chen’s house to get ready for the party that Sandra so graciously put together. 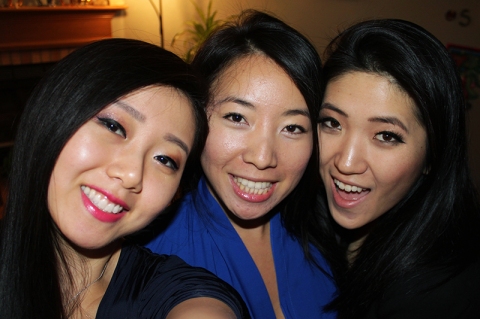 Lucy tried her hand at playing makeup artist. Putting makeup on someone else is a true challenge when you’re only used to applying it on yourself!

I didn’t really capture any photos of our outfits, but Xixi snapped one of my open-backed dress. Ooh la la~ 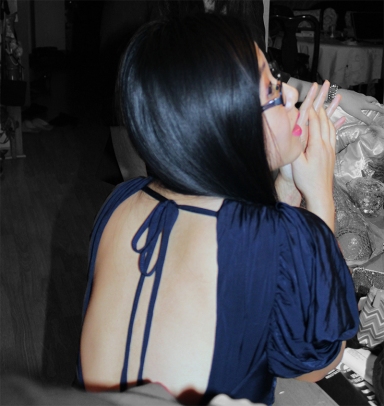 I was pretty cold all night. #worthit

Yawen pregamed with some 包子 (buns) she found in Chen’s fridge. Comfortably raiding your friend’s fridge is a true sign of friendship.

I also made her try on some lip stain — hot! 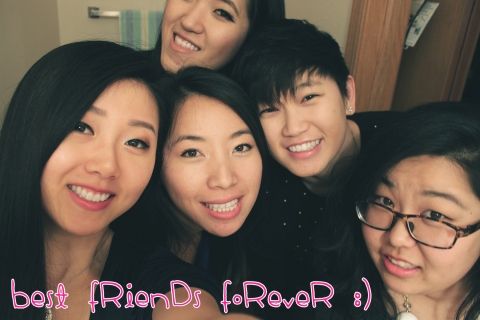 The next morning, we went out for our first meal of the year…at Popeye’s. Because Xixi wanted fried chicken…again. So we braved the treacherous snowy weather for fast food, of all things, which I rarely eat of my own volition. (For the record, I voted for Qdoba.)

Our other weekdays were spent having dates at the library — Chen to work, Xixi to write papers, and me to…read novels — and watching Netflix. I specifically signed up for the free trial so we could watch Scandal, which I had heard so much about but never got around to watching until now. As it turned out, Chen, Lucy and Yawen ended up liking it while I thought it was kind of dumb/boring and that the camera work was incredibly distracting.

The weekend after, we returned to the city for a night out, which started with a stop at Jim’s for some hot dog action. I don’t eat at fast food chains, but I’ll always make time for a Chicago dog. MMMMM. 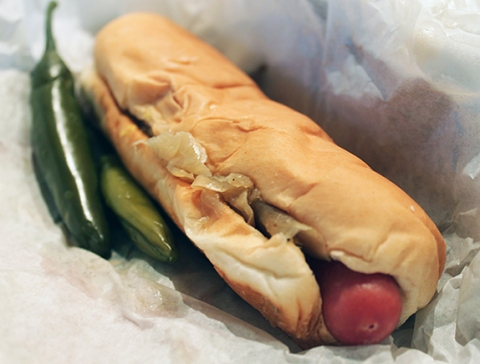 Comes with piping hot fries for less than $3!!

We bummed at Xixi’s apartment for the afternoon and watched Yawen bypass the electric water kettle to boil water in a pot on the stove instead. This is what living on a island for two years does to you — you forget how to use modern appliances. Welcome back to civilization, Yawen!

Do you grow your own coffee beans too? loljk

At one point, these three were matching:

Then we watched Blackfish (amazing documentary, must-see and must prepare your heartstrings) on Netflix, ate some Greek food and prepared to venture out into the bitter cold. We were joined by Shirley (and later a few other friends) for drinks, music and dancing our little butts off. Fun fact: Shirley and I were born in the same hospital in China!

The next morning, Yawen, Lucy, Shirley, Lisa and I went out for brunch at Wasabi because I was strongly craving ramen. It’s hard enough to find good Asian food (like pho) in the suburbs; ramen is damn near impossible, but the few places that offer it in the city seem to be doing it well. I’ll miss New York’s plentiful Japanese fare for sure when I move back to the Midwest :(

These phone pics don’t do the ramen justice. SOOO GOOOD

Lucy is in the pre-stages of a food coma. Heheh just kidding

Winter break was capped off with a dinner party organized by my mother, who invited all the families of my BFFs for some homemade dumplings. We girls were supposed to make the dumplings for our parents, but for one reason or another all my friends ended up coming late and arrived only in time to eat. So much for that.

Three dads and a grandpa hard at work.

Moms watching over the rest of the grub. (Yawen’s family was absent due to prior engagements)

I brought honor to my family by making dumplings that didn’t fall apart in the soup!

Xixi throwing some side-eye at the latest two arrivals

At some point after dinner, Xixi’s phone decided to die, so she and our resident engineer operated on it (with eventual success)…

I think the power button was gunked up.

…while Chen and Yawen ate guacamole and fell down.

It’s best not to ask

This was the best winter break in recent memory (as well as the last one I’ll ever have! Eek!), and I couldn’t have spent it with better people.

See y’all in a few months!

§ One Response to Winter Break With The BFFs, pt. II

You are currently reading Winter Break With The BFFs, pt. II at auradis.