As stated in my earlier post, one of my goals this winter break was to spend a maximum amount of time with my best friends, who all managed to be in the same place for the first time in four years.

Winter break goals #1: Hang out with besties at least 72 hours in a row

I’m not sure if we actually achieved that goal, but we probably came close!

During our first week together, we tried to communicate with each other by group texting via regular messaging, which fell apart when certain people’s texts would appear to reply to individuals but still be sent to the whole group somehow. Very confusing. We decided to start a group chat on WhatsApp, which was the best decision ever. Here’s a snippet of our delightful conversation: 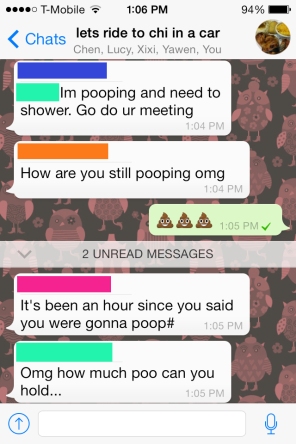 It turned out the offender took two separate poop breaks in the span of an hour. What a champ.

The chat was titled so because the first weekend, we had a bit of trouble figuring out how to transport ourselves into the city as our available vehicles were no longer usable for one reason or another. We briefly considered taking the train, which would’ve been overpriced and annoying considering we were hauling presents/booze/sleepover gear. Desperate times…it was strange encountering teenage-level problems as 20-somethings. Fortunately Xixi was able to borrow her dad’s car to ferry us over. #suburbproblems

Later that week for New Year’s Eve, the five of us gathered at Chen’s house to get ready for the party that Sandra so graciously put together.

Lucy tried her hand at playing makeup artist. Putting makeup on someone else is a true challenge when you’re only used to applying it on yourself!

END_OF_DOCUMENT_TOKEN_TO_BE_REPLACED

You are currently browsing entries tagged with friendship at auradis.