I hope I wasn’t the only one left teary-eyed after the finale-finale of Futurama last night. (If so, you’re all heartless!) The beleaguered show bid viewers a second farewell in “Meanwhile,” the last episode of its seventh and final season. It’s rare that a show gets to produce more than one goodbye-forever episode, and our favorite space delivery crew hasn’t changed all that much since the last time, “The Devil’s Hands Are Idle Playthings,” which aired at the end of season four.

Back in 2003, the title screen featured an optimistic and prescient message:

Fry and Bender have stayed the best of buds throughout the years, with the deliveryboy often needing counseling on his love life, and the robot responding harshly but eventually revealing his soft side.

Interestingly, in 2003’s episode, Bender promptly trades his shiny metal butt to Robot Devil for a stadium air horn, while season seven spent an entire episode (“Assie Come Home”) trying to get the plate back after it’s stolen.

Back then, Leela was still assumed to be an alien orphan:

Last night, she (spoiler alert?) proudly invited her mutant parents to the wedding.

Last time, Fry and Leela as a couple was still a fantasy played out on stage, courtesy of the Holophoner:

In present day, their love is as real as the pixels on your TV: 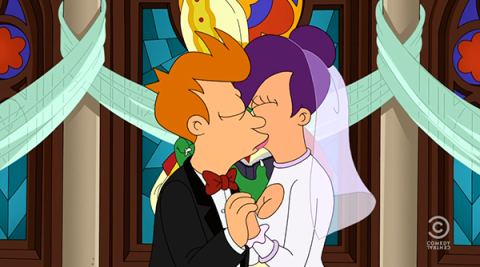 “Meanwhile” successfully gave us poignant closure while leaving the door open for future adventures. For now, you can find me petitioning on the steps of Comedy Central and reliving past Planet Express memories in gif form.

(This post was written for class and is crossposted from NYU Pop Culture.)

You are currently reading Futurama Says A Loving, Final (For Now) Goodbye at auradis.