Why I’m Leaving Manhattan And Moving To Queens

In two weeks, I will be moving out of my East Village apartment all the way to Sunnyside, Queens. Some might wonder why I’d leave such an amazing neighborhood for some bufu land that even many New Yorkers have never heard of, but you’ll understand by the end of this post.

As you might recall from my move-in post, for the past nine months, I’ve been living in a two-bedroom with my roommate Catherine and her daughter C, who just turned 4. People give me weird looks when I tell them I live with a toddler, and I guess it’s for good reason. Who would want to live with someone else’s kid? And perhaps those people are correct. But more on that later.

My main reason for moving out was economical. Rent cost me $1180 per month, which is reasonable for the location, but with the additional $40-ish for utilities and astronomical $60 for cable/Internet (she subscribes to HBO/DVR/etc.), I paid almost $1300 every month. Of course, when I say “I paid,” I mean “my parents paid,” which makes me feel awful for being such a leech. In contrast, my new apartment in Queens is around $900 a month. That’s a $400 difference!! What the what!

That in itself is compelling enough, but there’s more!

My second reason was that I simply couldn’t stand the noise anymore, and there are different parts to that. The great thing about living in East Village is the proliferation of restaurants and bars open at all hours — options upon options for the hungry and thirsty. The downside, of course, is the boisterous pedestrians. Normally I don’t mind because it’s only loud on weekend nights when I’m awake anyway, but sometimes, like last Sunday when I was trying to rest early for the first day of my internship, I was awakened at 3 a.m. by a group of people yelling and singing merrily out on the street. It’s Sunday! GO HOME!! I closed my eyes and imagined tossing heavy objects out the window onto their heads.

And I don’t know if this is a thing in other neighborhoods as well, but the garbage trucks that come by almost every night between 3-6 a.m. are insanely loud. Like, I live on the fourth floor and I can clearly hear their heaving engines and clanking beer bottles even with the windows closed. I thought I’d be fine living with all this…ambient noise, but it’s starting to give me headaches, especially when I leave my window open at night during the summer.

The other source of noise is my roommates. When I first visited the apartment, little C seemed like a very cute, well-behaved girl, and that pretty much held true for the first few months I lived with them. As she grew older, however, she became more prone to tantrums and rebellion. I can’t even count the number of times I’ve been rudely awakened at 6 or 7 a.m. (I usually wake up at 8:30) because C is crying about something.

This morning, she was shrieking about Cheerios, which apparently they couldn’t have because they were running late. Sometimes they just happen to be talking loudly. Did I mention that not only am I a light sleeper, my bedroom door is French and it doesn’t even close all the way because the building is old and the door-frame has warped or something. So I can hear everything that goes on in the living room.

When this stuff happens, I obviously lose sleep and wake up irritated. It’s bad for Catherine because she gets stressed out trying to hush C, who sometimes just gets more fussy. Bad news all around. I don’t complain about it to Catherine because I get that it’s difficult to teach a toddler the concept of whispering.

One time when I was cooking dinner, C threw a one-hour screaming tantrum in the bathroom because she didn’t want to take a bath. Catherine tries to deal with her moods as best as possible, but as a single mother, she does get tired and exasperated at times. It creates a stressful environment for me because I’m sensitive to the negativity; it’s reminiscent to my middle school years when my parents fought with my brother all the time, and it was quite frankly the worst period of my life.

Ultimately, it’s tiresome to live with a child that you’re not related to, which might seem like common sense, but I thought I could endure it. I like kids, I really do, but the more I lived with one, the more I felt like I never wanted to be a parent ever.

Me and C during happier days.

The last straw was having to live with all of Catherine’s stuff. I frankly suspected her of being a borderline hoarder. When I first moved in, I was charmed by the homey atmosphere of the apartment; other places I looked at were as sparsely furnished as motel rooms. Over time, however, living there became claustrophobic.

First of all, C has enough toys for 10 children, and the little plastic pieces are scattered everywhere in the living room. I understand Catherine enjoys spoiling her daughter, but it’s ridiculous given the limited space in the apartment. No kid needs that many toys, and it’s a ripe situation for turning her into a spoiled brat. (Cue “When I was your age..!” monologue.) 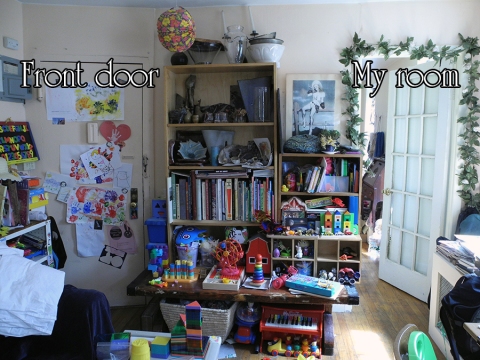 What annoyed me the most was that when Catherine started preparing the apartment for other people to come view it, she finally cleared the shelves of a lot of unnecessary crap. So, she’ll clean up for my replacement but I had to live with that junk for almost a year?? Thanks. 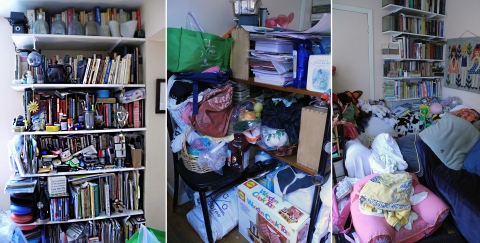 So. Much. Stuff. Everywhere.

The kitchen is also stuffed to the brim. I get one shelf of the pantry and the fridge, which is only 25% of the space. Catherine seriously hoards enough food for a large family, and I rolled my eyes to the skies every time I heard her say to C that they didn’t have anything to eat and needed to go buy more. What!!! I don’t even want to know how much of that food already expired or has cockroaches crawling around inside.

Lastly, the bathroom. I also have my own shelf here, which I keep sparsely populated. On the other hand… 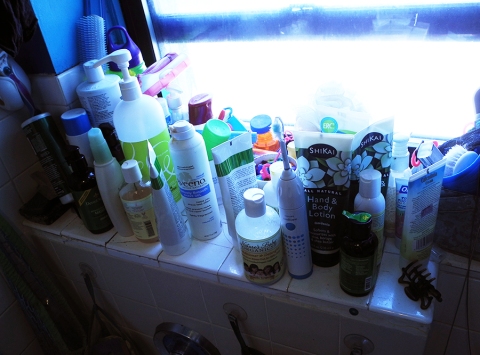 Literally none of these are mine. Who needs this many products?!

What IS all that?! There are bottles upon bottles of half-used who-knows-what and I can’t wrap my head around why there is so much STUFF in there. I just can’t.

The sink is also home to a bar of soap that’s probably 5 years old. (We use the Hello Kitty liquid soap on the other side.) The sink is already so tiny; why is that fossil taking up precious bathroom real estate?

It might sound like I utterly detest Catherine as a person, but I don’t. She’s actually a very friendly and warm-hearted person, but good friends don’t necessarily make good roommates.

All that said, I will miss living on E. 7th Street. The neighborhood has everything a young adult could ever want — food, drinks, diversity, safety at night, a general lack of teenagers (sorry but ew) — but the reasons to leave were just too compelling. I’m so psyched for my new apartment. Updates on housing to come next month!

You are currently reading Why I’m Leaving Manhattan And Moving To Queens at auradis.