Why I’m Leaving Manhattan And Moving To Queens

In two weeks, I will be moving out of my East Village apartment all the way to Sunnyside, Queens. Some might wonder why I’d leave such an amazing neighborhood for some bufu land that even many New Yorkers have never heard of, but you’ll understand by the end of this post. 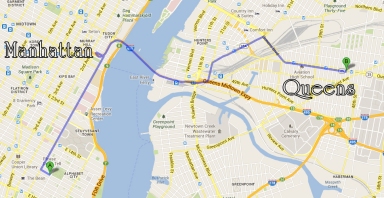 As you might recall from my move-in post, for the past nine months, I’ve been living in a two-bedroom with my roommate Catherine and her daughter C, who just turned 4. People give me weird looks when I tell them I live with a toddler, and I guess it’s for good reason. Who would want to live with someone else’s kid? And perhaps those people are correct. But more on that later.

My main reason for moving out was economical. Rent cost me $1180 per month, which is reasonable for the location, but with the additional $40-ish for utilities and astronomical $60 for cable/Internet (she subscribes to HBO/DVR/etc.), I paid almost $1300 every month. Of course, when I say “I paid,” I mean “my parents paid,” which makes me feel awful for being such a leech. In contrast, my new apartment in Queens is around $900 a month. That’s a $400 difference!! What the what!

That in itself is compelling enough, but there’s more!

END_OF_DOCUMENT_TOKEN_TO_BE_REPLACED

You are currently browsing entries tagged with rent at auradis.