Mmmmm, I just got back from a massage + facial, and it feels like the world is a beautiful place.

This treatment was one of the first Groupons that I bought in Hong Kong, which is kind of saying a lot because so far I’ve purchased 22. It was irresistible — a treatment that normally costs $345US was on sale for $13?! I was all over that, obviously. 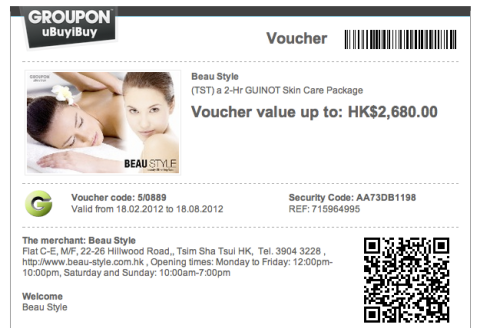 I was in the mood for pampering because lately, a lot of tension has been building up in my neck and shoulders, which is bound to happen when you’re typing at a desk all day. In fact, it had been so long since I bought the Groupon that I didn’t even remember that it came with a facial. My body was aching for a massage, and I had to find a professional since I don’t have B around to give me one, hehe.

One main purpose of using a Groupon is, aside from the obvious factor of saving money, is the opportunity to experience something new. The risk that I run here in Hong Kong is that I might venture into a place that caters only to locals, as in menus with only Chinese words and waitstaff that only speak Cantonese. This has already happened a few times, and in those cases I usually end up appearing deaf & dumb, but I get by. It’s odd each time because the Groupon website is in English; how do these businesses get their deals online without knowing any English??

BeauStyle, the place I went for my massage, was tucked away inside a hair salon. I think the receptionist spoke the best English — the manager didn’t speak any, and my masseuse could speak very little. It doesn’t seem like a good idea to get body work done at a place where you can barely communicate with the staff, but it was too late to back out!

I was led into a small, dimly lit room with a massage bed, and my masseuse gave me a towel/dress thing that buttoned up as a tube top. She also gave me a pair of very sheer underwear made out of fine netting, which perplexed me for a minute. Was I supposed to wear these as underwear or over my own underwear?? I didn’t want to surprise her with my naked bum if she wasn’t expecting it.

I ventured out of the room to ask, but the hallway was empty. Eventually another staff member walked by, and she answered my question by telling me that it was supposed to go on my head. LOL. Thankfully my masseuse reappeared to clarify my quandary (it was supposed to be worn alone) and hand me a hair net.

The massage came first. It’s truly a luxury to receive a massage from somebody who knows what he or she is doing, and in this case, she really put her hands to good use. I’ve previously only gotten two body massages before. One was a $10 Swedish massage in the Philippines, which was as intense and satisfying as it was cheap.

The second was in Mexico at our resort. My family had to endure the painfully long time-share spiel to receive two free spa treatments (if I knew we had to go through all that, I wouldn’t have asked for the massages..), which my mother and I redeemed. The experience, though relaxing, was underwhelming: It was basically a superficial body rub with body oil, whereas I was looking for something that would seriously straighten out my muscles.

Today, though, I got the real deal, and as my masseuse worked over the knots in my shoulders, I pondered whether I should tip her. It’s extremely uncommon in China, and I wouldn’t know how much to give so as to be kind without being insulting, but I was feeling quite positive so far…

Next came the facial, which apparently used fancy Guinot products from France. Having been at church just before my appointment, I was wearing makeup, which all had to come off. I’ve never gotten a facial before, and I really had no idea what to expect, especially considering the treatment was supposed to last 45 minutes. I anticipated being slathered with creams and rubbed down, maybe exfoliated or something. As I lay face-up on the massage table, my masseuse rolled in two little carts, one stocked with products and another that she plugged in. Hmm.

The first part of the facial did involve various chilled serums being rubbed on my face; they smelled lovely and felt refreshing. She then turned on a bright light and directed it at my face like I was at the dentist’s office. She paid some attention to my eyebrow area (a bit of tweezing, I think?), which was unexpected. She then laid a strip of tissue over my eyes and started doing…something…to my forehead.

I couldn’t figure out what it was. At first, it felt like acupuncture, but I could feel that there were no pins left sticking out of my face, so that was ruled out. It was uncomfortable, but my curiosity was distracting me from the feeling. As she got down to my nose, the pain turned excruciating. It felt like she was digging into my pores with a sharp object, and I had to clench my fists and jaw to keep from squirming. I started to second-guess my intent to leave a tip. She moved on to my cheeks and chin, and at that point my whole face wanted to shrivel up into fetal position and roll away. It was like she was trying to pop my pimples with a hot needle. I still have no idea what exactly happened, but I was incredibly relieved when the torment was over. My threshold for pain is pathetically low.

At that point, I started getting the feeling that I needed to pee, but the treatment was only half over, and besides where was I going to go in my basically naked state? My masseuse turned off the spotlight, applied some more cream and started rolling my face with handheld rollers, which you can see in action at the beginning of this video. It seemed gimmicky to me, but anything was better than the horror of getting my face pierced dozens of times. (Unless it brings about some kind of skin miracle, NEVER AGAIN.)

Lastly, my face was wrapped with some gauzy cloth and slathered with more cream. I don’t know how long I was left there, but I think I fell asleep for a bit. It would’ve been perfectly relaxing, except when I woke up, I realized that I really needed to pee. The soymilk I had drank for breakfast was threatening to exit my body at any minute, and I probably spent a good five minutes trying to telepathically call my masseuse back in before she finally returned to apply the finishing touches.

I had a fright in the bathroom mirror after relieving myself. The places where my face had been stabbed with a needle had formed red dots, leaving me looking like I had fought and lost a battle against rosacea. (And they hurt!) Great. How was I supposed to go back in public and make it back home in this spotty and makeup-less condition??

The manager handed me a little bottle of toner on my way out (technically I was supposed to receive two, according to my Groupon, but I didn’t push the subject). Regardless, I left feeling like I had gotten my money’s worth.

Rose Essence or something

On the subway on my way home, as I was standing in the corner trying not to be seen, I was accosted by a young girl (probably age 14 or so) who basically grabbed my arm, attached a handmade bracelet to my wrist, handed me a small placard and stood there expectantly before I could react. The hell? I had never been asked for money in such a bold manner (well okay, there was that one time when I stupidly let some guy into my apartment and ended up writing a check for $60 that I ended up canceling), and my brain, in its state of relaxation, wasn’t that quick on the uptake.

The card she handed me had two paragraphs of traditional Chinese, which would probably take me 10 minutes to read fully. I skimmed it and read “Hello, I am a _____ girl, blah blah blah something something thank you very much.” At the bottom was written “$20-30元.” A suggested donation? The girl looked fine — she wasn’t dirty and didn’t seem homeless or crippled, but the fact that she handed me a card as way of introduction led me to believe that she wasn’t able to speak. Fine. Whatever. I didn’t have time to stand around and ask questions anyway, and I had already rejected some other charitable organization on the street earlier.

I handed her a $20 bill, and she held up three fingers in response. LOL. FINE. I pulled out another $20, and instead of giving me change, she gave me another bracelet. We arrived at the station and she ran off, leaving me still flabbergasted. I took it as a way of paying it forward to the universe for giving me a nice day.

§ One Response to Rub A Dub Dub

You are currently reading Rub A Dub Dub at auradis.