The Things I’m Throwing Away

After more than three weeks of being at home, I decided it was a good time to stop living out of my suitcase. The problem was that everything I owned from college [except my TV] was crammed into my room, which was an amazing feat that also created a fire safety hazard.

The situation was complicated. As I am currently looking for a job, I can’t unpack everything because I don’t know where I’ll be in a few months. At the same time, my room was a disaster zone and I knew it. I also tend to clean my room very thoroughly, meaning that I empty out all my drawers and my closet, throw away half my things and redistribute everything else. This time-consuming process doesn’t happen too frequently, especially while I was away at college, which explained why I still had files from 2008 piling up on my desk.

Most of my time was spent on my closet, and I found some interesting things I didn’t even know I still had. This post will be a compilation of things that I threw away. Although I no longer have the physical room for these things, each of them contains a story that I don’t want to forget.

First were all these purses. My gosh, I didn’t know that I still had so many … I’ve never really been into designer handbags, and some of these date back to middle school [which was TEN YEARS AGO o_o], which explains why they might seem to be such poor quality, ha ha. 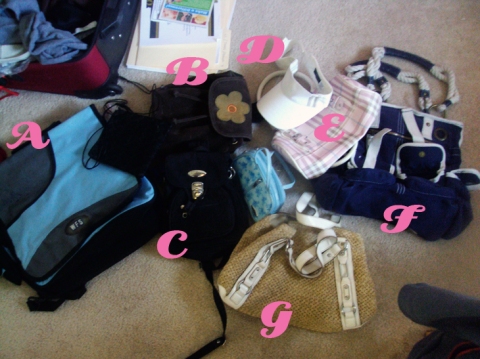 Specimen A is the messenger bag I used in high school after I realized I hated wearing backpacks — so bad for your posture! It was still in good shape but pretty dirty on the outside.
I acquired Bags B & C  around the same time, probably before I was even in middle school. I felt so grown up wearing the black one because it was all sleek and ~European-looking LOL…but then one of the straps broke. So I resorted to the brown one for a while.
Object D is a visor. I remember bringing it on an eighth grade field trip to Cantigny, during which our teacher expressly forbade us to wear any headgear. We protested — it was a hot day! — but I can’t recall whether we were successful [probably not].
E is a cylindrical purse I got in China when people were crazy over Burberry [and bootlegging the Burberry design]. My mom tried to make me haggle for it myself, but at the age of 14, my haggling skills were even worse than what they are now. We ended up buying it for around 35RMB.
I really liked F for its sailor motif. I think I bought it at that Steve & Barry’s place that used to be at Fox Valley Mall and sold really cheap clothing…
My dad bought bag G for me the first time we went to visit Mizzou. We stopped somewhere in Missouri for dinner at a Chinese buffet and then headed across the street to a nearby Target to walk off all the MSG, and that’s where I found this purse.
The little blue handbag in the middle is a cheap thing from China. I don’t really recall using it but there was a mirror inside so I guess I did at some point, ha ha.

In one of the pockets of bag A, I unexpected came across a wrinkly old photograph of a guy I still know. I guess I had a creepy crush on him back then or something LOL which is funny because I remember being scared of him when I was younger… 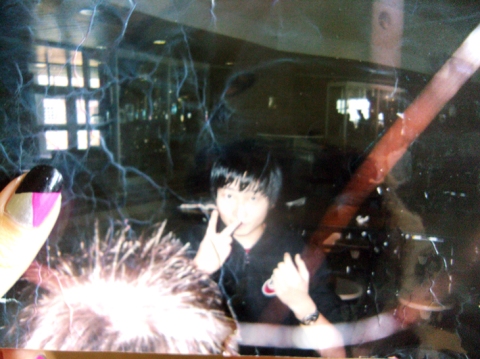 On bag G, I also discovered these little pins, two of which were from being the co-captain of the badminton team my senior year. Although they’re in this post, I decided to keep the pins while throwing away the purse. 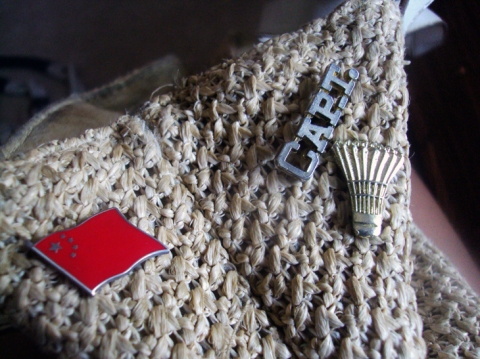 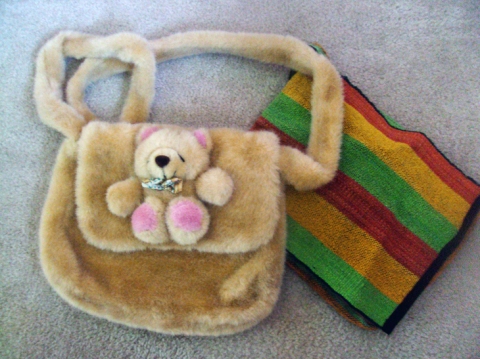 I really liked the fuzzy one but I’m pretty sure I rarely — if ever — used it in public LOL.

This is a hat that AS gave me [or maybe I “borrowed” it?]. I remember wearing it in front of the mirror while listening to Usher’s “Yeah” and feeling cool because it was one of those ~trucker hats. I guess my idol at the time was Ashton Kutcher, idk. 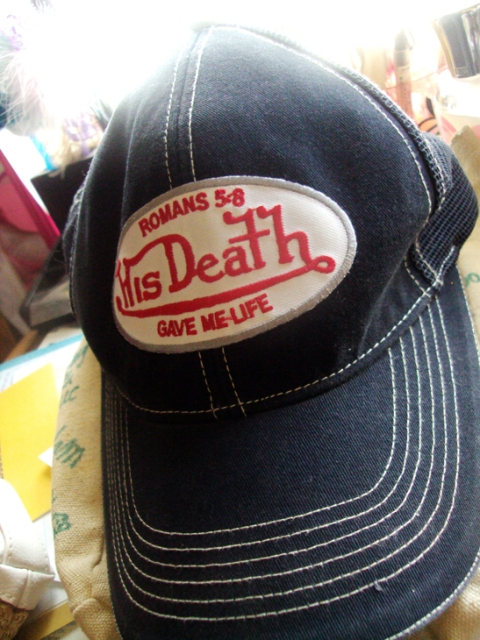 I think my third grade teacher made this for me when I moved from Downer’s Grove to Naperville. I used it to carry my library books until the books I read were too fat to fit into the tote… 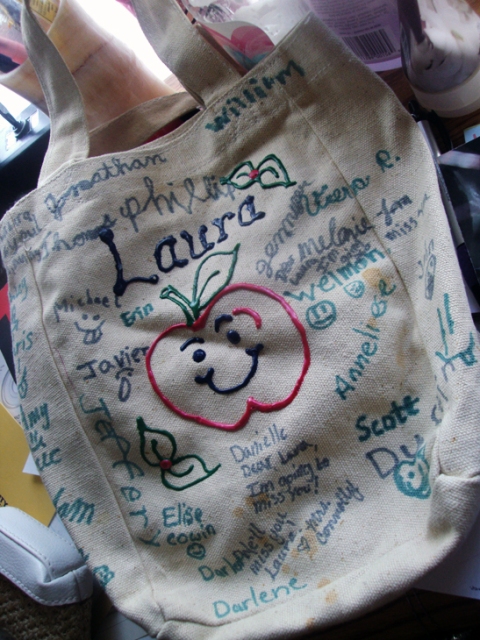 I came across some photos of me & the ex, which I promptly tore up and threw out. 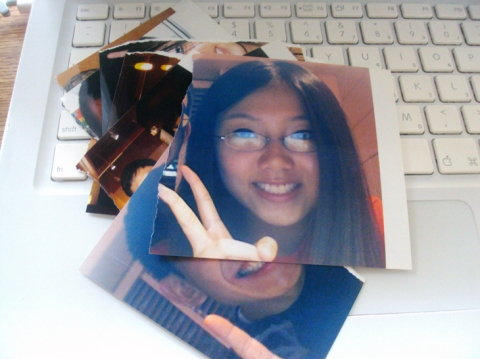 I never realized we had so many Gameboy games [not pictured: 6-7 other cartridges]! I still have my old Gameboy Color & my brother’s Gameboy Advance in addition to my Gameboy Micro, which my friends bought for me as a 17th birthday present. 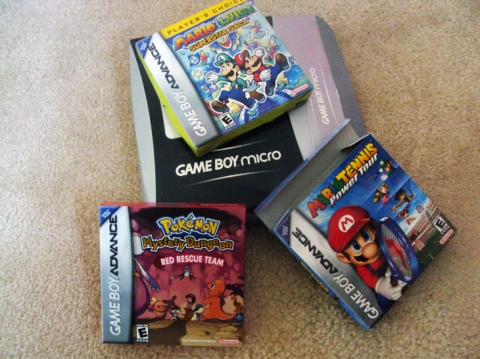 In Honors Physics my junior year of high school, we had a bridge-building contest. Most bridges snapped, but mine remained whole because my dad built the whole thing for me LOL. I still didn’t win, though, because my bridge bent enough for the dangling weight to touch the ground. I still remember the guy who won…Chris Walter…that nerd…who is probably out making bank at some cushy job right now… 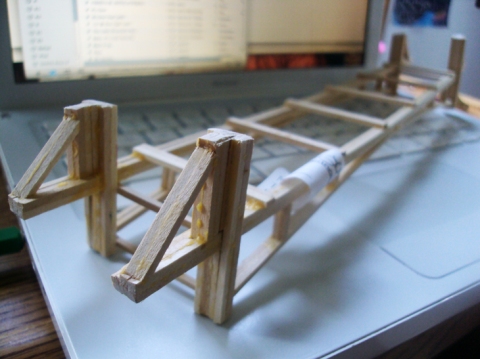 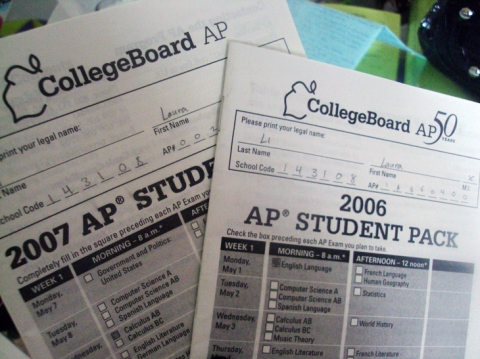 Ha ha I was so miserably bad at AP Euro… 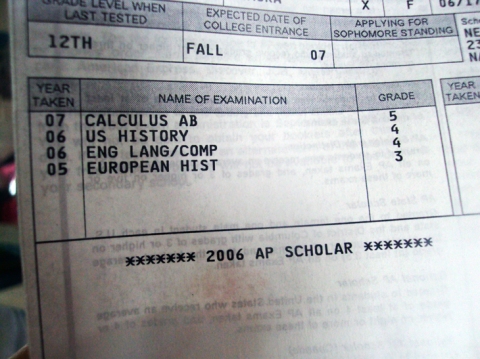 I feel like I should’ve taken more AP classes in high school. My brother just told me he wanted to drop out of Honors English for next year BUT HE MUSTN’T! Otherwise he won’t be eligible for AP English his junior year and won’t be able to take the AP Lang/Lit tests and will therefore be subject to whatever absolutely abysmal English 1000 class that is required of college freshmen everywhere! AHH!

I also unearthed a big leaf printed on a piece of paper [presumably from church/Sunday school] that had a bunch of French written on it in my best friend’s handwriting. 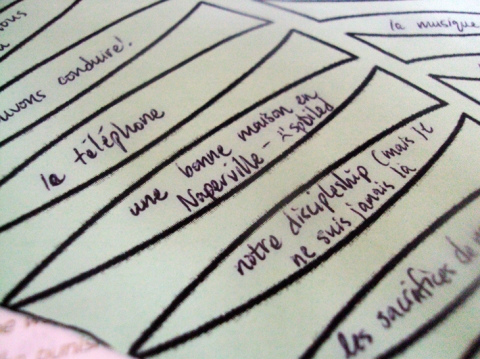 I uncovered a whole package of American Eagle All-Access pass card things, which I signed up for once and never used again. 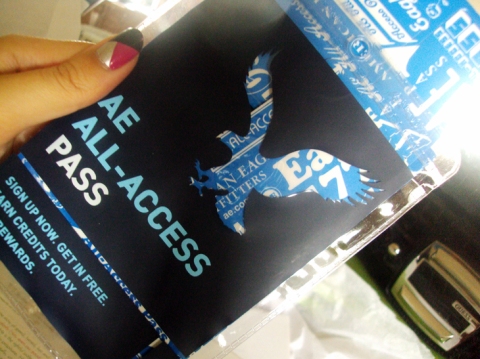 Lastly, I found a ribbon for 5th place. What?! What is the purpose of celebrating or even compensating someone who came in FIFTH place?? This should not even exist! And why did I bother keeping it?!? …………. [I believe it was from something badminton-related. How embarrassing.] 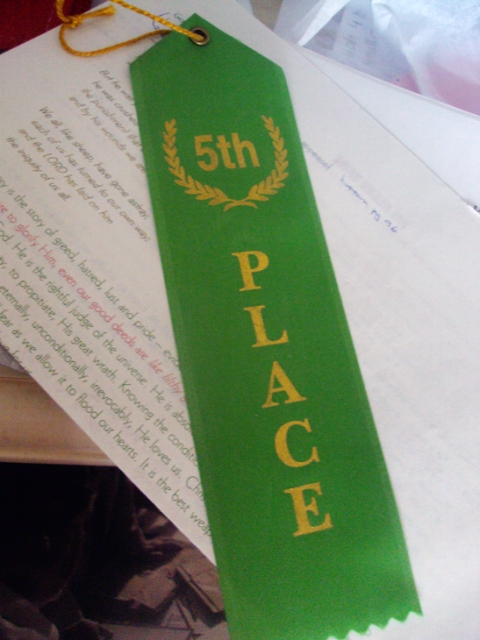 § One Response to The Things I’m Throwing Away

You are currently reading The Things I’m Throwing Away at auradis.