This is a compilation of my final thoughts on my trip to Mexico.

The Mexico City airport security rides on Segways! I tried to get a photo but couldn’t. Also, all their TV screens have huge LG and Samsung labels attached [only relevant if you’re interested in Korean things lol]. I thought national tourism videos were cheesy when going to different countries, but the “welcome to America” one was pretty unbearable too.

Our hotel room had two beds, and my father discovered a narrow fold-out bed from the wall. Amazing! My brother was originally supposed to sleep on it, but he complained that it was too hard. I tried it out and thought it was acceptable — honestly, after sleeping on the slab of concrete that passed for a mattress at Hong Kong University, any other mattress is comparatively comfortable. 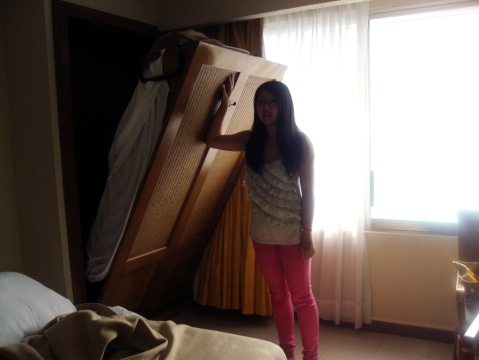 On Tuesday, we [minus my brother, but obviously he had to come along] wanted to go shopping for some souvenirs. We had heard that public buses traveled from the hotel strip to the downtown flea markets, so that morning, we boarded a bus and asked to be taken to the downtown market. I imagined a colorful, vibrant place with people selling authentic Mexican goods from small shops with both tourists and locals mixing together in a wonderful cacophony of commerce. It was an exciting prospect.

The bus took us past dozens and dozens of resorts, each constructed with just enough exotic Mexican flavor and with names like Fiesta Americana and Beach Palace. We seriously drove for half an hour and saw nothing but hotels and big name restaurants like Hard Rock Cafe. Seeing any sign of native life was clearly not an option for the majority of tourists. 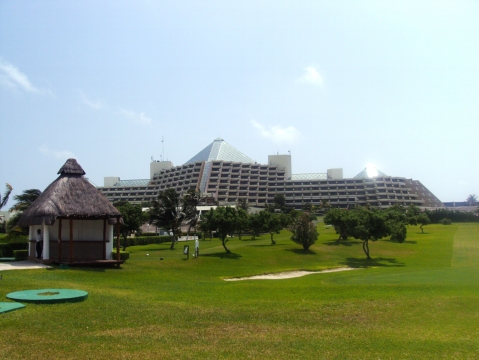 When we arrived at our appointed stop, I stepped off the bus in a daze of disappointment. All I saw was a small, deserted strip of touristy shops. The bus drove off, and the four of us were left alone. And unlike in Asia, there was no way we could pass as locals. We were the only foreigners in sight. 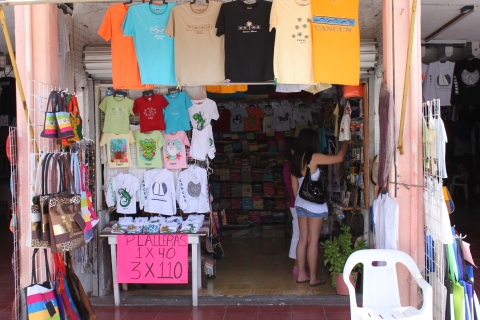 Shopping has never been so lonely (thats me in there).

I don’t know if it’s because we were there somewhat early in the day, but we were seriously the only shoppers there. And while the shop owners weren’t overly aggressive or desperate, I still couldn’t enjoy myself. Some would follow us around the shop, one guy kept putting his hand on my back [ew], and most would try to get me to haggle with them even though I despise haggling.

The shops didn’t even have anything great, just t-shirts and shot glasses and touristy junk that I couldn’t bring myself to buy because they were simply useless. Surprisingly, most of the stores sold cute little glass or stone pipes, and I was interested in buying some for my friends just for the novelty of it, but the prices were too high to justify a purchase that would never really be used. At least, I’m pretty sure none of my close friends smoke >_> 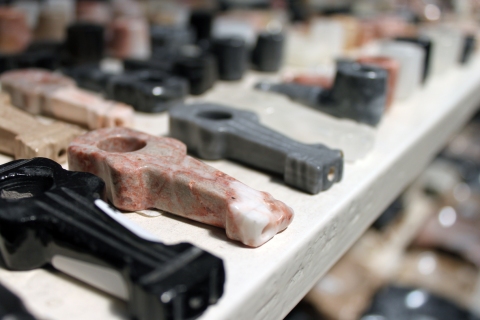 Not sure how to use these little guitar pipes.

The whole experience was just horribly unpleasant, and we only bought a few small things before making our way down the street to look for more shops. We came across the equivalent of a dollar store, which sold cheaply made products at a low price. The hilarious thing was that most [if not all] of their products came from China. LOL. Some even had Chinese words printed on the packaging! I didn’t take a picture because the employees kept watching us.

We then made our way across the street to a grocery store. It might seem weird that we’d visit a local supermarket while on vacation [and my brother certainly had thoughts about that], but it was probably the closest thing to authentic Mexican culture we were going to see that day. There were some interesting sights: 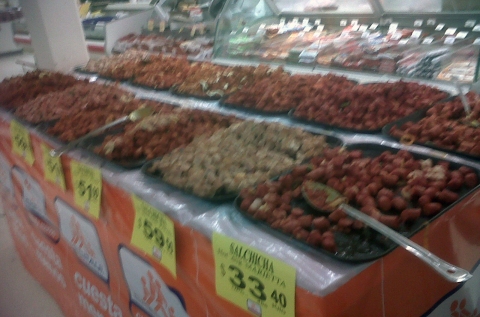 How many different ways can you cook chopped hot dogs? How about 12? o_o 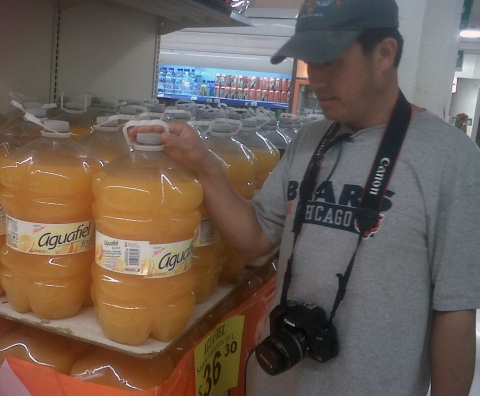 Ginormous jugs of juice! Dad is there for size comparison.

At breakfast on Thursday, mother commented on some guy’s shirt. “Did you see it? It says Bikini is better.”
Dad cut in. “That’s probably because of his wife.”
I had seen neither the guy nor his wife, but I assumed my dad meant his wife was hot. On the contrary:
“She was so stocky that he probably meant for his wife to lose weight so she can wear a bikini,” dad continued. I rolled my eyes at his lame attempt at a joke.

A few minutes later, we were discussing the two Canadian girls I had met the other day.
“I saw them tanning on the beach,” dad said. “Really fat, both of them.”

At this point, I had had enough of these comments. I used to take for granted that my parents would ask me about my weight every time I came home from school, but recently I’ve realized that only my dad asks me anymore. Additionally, I’ve come to realize that he’s pretty socially conservative [he voted for McCain, for heaven’s sake], but could he also be…sexist? I decided to call him out on it.

“Dad, why do you care so much about people being fat?” I asked. “You talk about it a lot.”
He blinked. “I just want people to get thinner and healthier,” he replied.
“But you only talk about women being fat,” I pressed. “You talked about those female dancers at the show on Tuesday night. And that bikini shirt guy’s wife. And those two girls from Canada. And you always ask me if I’ve gotten skinnier.”
Mother laughed. “Your dad clearly has a problem.”

Dad was taken aback by my confrontation. “I’m sorry,” he apologized, and I smiled back at him. I can’t have my own father being sexist…that would be simply unacceptable!

I’ve never really been sunburned before — the first time it happened was when I was lying on the beach in New Jersey and my butt got slightly burned, which I didn’t discover until I showered. I definitely learned  to cover my bum with sunscreen after that. And despite all the other times I’ve ever spent in the sun, I’ve only ever gotten tan, not red.

Thus, I took for granted the fact that my skin would be immune to the sun’s UV rays. Well, that didn’t work out so well, because the sunshine near the equator is NO JOKE.

My sternum was the first thing that showed while we were still in Cancun. Initially, there were blotches of red that made me look like a horrible tie-dye experiment. Other parts of my body — mostly extremities — tingled when I showered, but I thought that would be the worst of it. I just rubbed ointment and lotion everywhere and figured my body would get over it soon. Alas…

The following week, I thought all hell had broken loose on my upper chest. My skin was caked with white as if I had just walked through flour. It was both shocking and frightening to look at, honestly. It made my skin crawl — the skin that wasn’t already dead, that is.

Soon, however, I became slightly obsessive about picking at my peeling epidermis. It was captivating to rip shreds off my own skin to reveal the new layers underneath. When my chest area cleared up, I thought that was the end of it. Again, I was proven wrong. A few days later, it spread to my arms. Then my legs. Every time I got out of the shower, new cracks in my skin were revealed, which was at once disgusting and morbidly fascinating. I could spend hours examining my skin and picking at it. The Internet says I should leave it alone, but the wounds are no longer raw — they’re just dead, hanging skin, and they need to get off my body.

You are currently reading Hasta Luego, Mexico at auradis.