On Saturday, I woke up at 130PM after sleeping at dawn due to a night of 3AM dim sum. I would have slept even longer if I hadn’t planned to go see 4Minute that afternoon. By no means am I a big fan of theirs — I never even bothered to learn their names — but their songs are pretty good, and why not go see them for free while I can?

Kathy, Kaiti & I roused ourselves and headed to the MTR station. There was only one problem: the mall, apparently called Emax [though the signs were labeled as something else] was located in Kowloon Bay. In Hong Kong, there is a place called Kowloon Bay, and then there is one called Kowloon, which is actually by the water.

By the time we realized we were in the wrong district, it was already half an hour before the show was supposed to start. Another 30 minutes were eaten up by the MTR, on which the three of us discussed our common love for Kpop. Both Kathy & Kaiti had been in China during Chinese New Year, meaning they were completely unreachable, and Kaiti was especially distraught at having missed her favorite group.

Upon reaching Kowloon Bay, we walked as quickly as we could in the direction of the mall, which looked relatively close to the MTR station:

ACTUALLY, we squandered an hour wandering around the city. None of us spoke Cantonese, which limited our confidence in asking for directions [we could barely communicate with the one guard we talked to]. I felt guilty about leading my friends on such a hopeless journey; we finally arrived at Emax just at the end of the fansigning — 4Minute & guest stars Mr. had already performed [the latter were nowhere to be seen at all]. 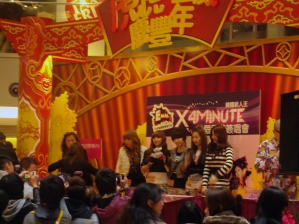 The venue was pretty much the same as where I saw SHINee. We watched from the sidelines as ticket-holders filed to the stage and had their belongings autographed. I noticed a multitude of fanboys and was saddened that I had missed seeing them in action. Slightly disappointed, we headed over to the elevators behind the stage, where a crowd had already formed to wait for 4Minute’s exit.

Kathy & Kaiti went somewhere else [for a better view, I presumed] while I stayed behind, camera in hand, standing under the tense gaze of the security guards for the celebrities to appear. After a few minutes of waiting expectantly, we were pushed farther back from the elevators by the barriers that the guards put up. The crowd wasn’t huge, but we were packed rather tightly, which didn’t faze me because I had long since lost any sense of personal space.

I felt some movement from the guy directly behind me but didn’t think much of it until his hands suddenly gripped my hips and he started to grind on me. HOLY COW WHAT THE SICK NASTY.

My mind froze.
Is this really happening?!

It’s times like these when I wish I were more brazen. Instead, I have this stupid aversion to embarrassing  anyone, and apparently this consideration extends to creepers, of all people. I should have yelled at him to CALM YOURSELF DOWN BACK THERE, but instead I stiffly moved to the side and placed my elbow between us until he stopped and went somewhere else [to terrorize someone else with his crotch?! I don’t know].

I could hardly think straight afterward and still don’t know what to make of it. I haven’t actually told anybody about this because it’s more than slightly embarrassing, but I wanted to share it here IN CASE THIS EVER HAPPENS TO YOU, GIVE THAT DIRTY PERVERT A BEATING or at least take his picture & put it on the internet so we can all troll him.

You are currently reading One Two Three Four & Pervert Alert at auradis.