Nothing Can Stop Me From Loving

My mind is still trying to process today’s events, because there’s simply too much to handle.
It started like this.

I came home from having a late dim sum lunch with some other exchange students with the intent to take a nap, but decided to spend some time online first. This habit proved rather fortunate this time because LC asked me over Gchat whether I saw SHINee when they arrived in Hong Kong on Friday. It is probably important to note here that SHINee has been my favorite group for a while, and for me, seeing them in person would basically be the equivalent of a hardcore Bulls fan shaking Michael Jordan’s hand.

Naturally, I completely freaked out. I had heard that they were coming to HK but didn’t know when or why. At the time, I was also on the phone with Cebu Pacific Air trying to book a flight to the Philippines; I started cursing audibly at my computer. Rosaline, who was attempting to take a nap, glanced over at me and popped out of bed when I told her why I was so agitated. My call failed shortly afterward and I didn’t bother calling back because I was too busy looking up information online. Thankfully, I was able to find this:

I immediately ran next door with my laptop to ask my friend from mainland China to read it to me. SHINee was performing in a mall for Chinese New Year in SIX HOURS?! [So much for having dinner with Nadia and meeting her boyfriend.] I HAD TO GO. There was one slight inconvenience:

Getting to Tuen Mun wouldn’t be a problem, but the last train to leave would be at 12:04AM, whereas the show was supposed to go until midnight, according to the customer service lady I called. She also told me that the show’s tickets were given to certain customers of the mall and were all gone. Annoying, but I could work around it. This is the schedule I crafted for my evening:

5PM nap
6PM paint nails [yes, this is important & indeed took an hour]
7PM get $ from bank in case I need to bribe someone to get in
8PM go to subway station
9PM arrive in Teun Mun
1030 SHINee OMFG

[Note that nowhere in there is “dinner,” because at the time I still wasn’t hungry, and before & after the show I was too stressed traveling to a strange place, so I basically had Mountain Dew & Coke Zero for supper.]

Rosaline couldn’t come with me because she was spending time with her family, which is what normal people do on Chinese New Year’s Eve unless you’re an orphan like me. No matter; after a month of being in Hong Kong, I finally feel comfortable enough to travel by myself. I followed my schedule exactly, except I didn’t go to the bank because I spent an extra hour trying to research how I would get home. There really were no other viable options, so I figured I’d pull a Cinderella and get out of there before midnight, since being homelessly stranded is really not a good way to spend a holiday. 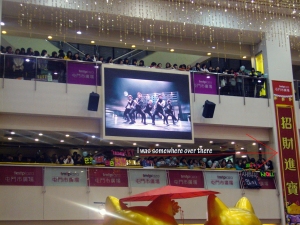 Prepping the fans by playing MVs

Tonight’s weather was some of the worst that I’ve experienced so far in HK. The clouds drizzled heavily and the wind blew so hard that it was actually better to close my umbrella than have it get blown inside out. Luckily, the sky was clear in Tuen Mun, where I wandered around for half an hour trying to locate the mall. I finally found the right building after calling the rather unhelpful customer service guy twice. Even then, I couldn’t find a feasible concert venue amongst the crowded shops, but the cheering voices led me to the correct spot in the heart of the shopping plaza.

Despite my time squandered while lost, I arrived an hour early. A great crowd of teenagers had already gathered on the sidelines of the stage and the balconies of the two upper levels. It was just like being in Korea: screaming fangirls waving SHINee balloons and black cardboard signs splashed with the names of their favorite members. It’s a good thing I look young, because I was pretty sure I was the oldest one there. The girls in front of me were shorter, and I was doing fine blending in until the one whose butt I kept accidentally touching turned around and asked me a question [perhaps related to that, but it sounded like she was asking if she was blocking my view]. I was thus outed as a non-Cantonese speaker, and the young girl next to me actually asked if I was a SHINee fan [LOL].

It hurt to watch the lucky people with tickets settle into their seats, but getting to watch this kind of event for free is a pretty rare occasion. The stage was a tiny one in the middle of the mall in the middle of nowhere — this is where SHINee is spending their New Year’s Eve? They deserve better. I felt dazed just thinking of being in the same square kilometer as SHINee…or perhaps it was from lack of sleep. At some point before the performance, Rosaline told me via text that the MTR would run all night because of Chinese New Year, so I was free to stay as late as I wanted.

I was utterly surprised to see guys sitting and standing among the fangirls. Were they actually fans or were they just taking up space unnecessarily? My question was answered when I heard the guy behind me screaming along with SHINee’s lyrics. I stood there contentedly until the emcee went on stage and I was quickly reminded that the program would be in Cantonese, and I wouldn’t understand anything. This is why I recorded video of most of it, which I will later show to Rosaline so she can translate for me, hehe.

Stage = size of my dorm room

The first performances were by Hong Kong artists, with games in between songs like telephone charades to give certain ticket-holders a chance to be on stage. The whole not-speaking-Canto and not-knowing-the-artists thing made it rather boring, but it gave me adequate time to take down my thoughts on my Blackberry. I thought about how I would tell other people about my experience and could only picture myself babbling like an incoherent idiot.

When SHINee finally appeared, I literally could not stop myself from screaming from excitement despite my best attempts to keep my composure. It was unreal, like seeing gods [which reveals my spiritual illness..]. After my short bout of shrieking, I hyperventilated a bit from the reality of seeing them in front of me. They are incredible in real life.

Like good little fans, the crowd chanted along with SHINee’s songs; the three they performed were “Replay,” “Jojo” and “Ring Ding Dong.” I actually wanted to listen to them sing, but it didn’t really happen. My position was close enough to take video, but not enough to take good pictures or faint from sheer proximity. The boys performed well, of course, and had a translator for the extra bits. I can’t describe how amazing it was to see them with my own eyes when they had previously only existed on my laptop screen. It was also interesting to see the little things that happen onstage that are not usually broadcasted, like Jonghyun wiping the sweat off Taemin‘s face with a tissue, or Onew being his usual dorky self, or the fact that all of the photographers get onstage after the performers leave and take pictures of the audience [I have no idea why]. 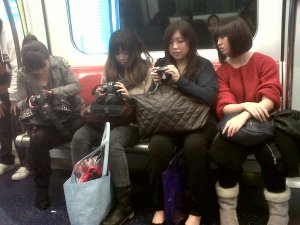 I didn’t stick around very long afterward because my back hurt from standing. There was a disproportionate number of females on the MTR, and I sat across from four girls who had clearly just departed from the show as well — they were all looking through the pictures they had taken on their fancy cameras. They looked even older than me, which made me laugh because SHINee is known for having a lot of “noona” fans; that is, female fans who are older than the members of the group. I was glad not to be the only one present…

When I got back to Causeway Bay an hour later, I spent 35 minutes wandering around looking for the correct bus stop. Then, after I successfully boarded it, the bus completely SKIPPED my stop [because I didn’t understand when the driver asked if anyone needed to get off there]. I got off at the next one, half a mile away in the middle of nowhere. I crossed the street to take a taxi back, but the taxi driver took me around on the longest possible route to get back to my dorm — I might not know enough Cantonese to tell him he’s being a jerkface, but I knew enough to recognize the scenic route. I didn’t really care, though, as long as I wasn’t being abducted.

No matter how many pictures you take, you realize on the way home that it’ll only ever be a fantasy.

§ One Response to Nothing Can Stop Me From Loving

You are currently reading Nothing Can Stop Me From Loving at auradis.