I’ve realized rather recently that gift-giving is one of my love languages, though in a more minor way than my two main ones. I really enjoy buying things for people that I love, which is why it took me an hour to pick out a hat for my brother’s birthday present — it had to be perfect. I groused about how much it cost [$29 after tax], but I decided it was worth it.

After he had gone to bed on the eve before his birthday last week, I put the present, wrapped up, before his door so that he could receive it first thing in the morning. I’m always the last one awake in my family on the weekdays, so by the time I came out of my room he had already opened it.

Larry was watching TV downstairs with the hat next to him on the table, and when I approached him I didn’t receive any word of thanks [not that I was looking for gratitude, but I figured he’d be excited to get what he had been wanting]. Instead, he told me that it looked weird on him. He put it on to show me and indeed, although the hat size was S/M, it was too big for him. I thought it looked better on me, to be honest:

So the hat spent the rest of the week on my parents’ dresser, unwanted.

Today after church, my mother took Larry to the mall to exchange the hat for another one. When I returned home from eating out, he had his new hat on already — this one cost freaking $39! 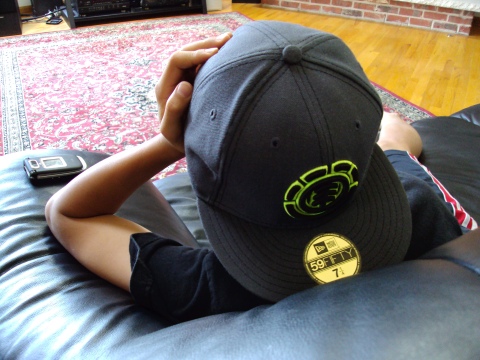 This one does fit his little head much better, but I still feel sad that my gift wasn’t good enough. But seriously? A forty dollar hat?? Jeez.

You are currently reading Give and Take at auradis.