Just past midnight on June 26, Kaiti and I walked through the taxi line at JFK Airport to get a ride home. We had just traveled 14 hours on our way back from Puerto Vallarta and just wanted to get home and to bed.

The passenger line for the taxi stand was empty, so as we neared the waiting row of cabs, we beelined toward the second vehicle, as the first one did not have its light on, which I assumed meant it already had a passenger inside.

It turned out that the driver of the first car (a black man in his 20s-30s with a Caribbean accent) was just on the sidewalk gabbing with some other people, and he waved us over as he headed back to his taxi.

The first thing he said to us was, “You girls going to Flushing?” Ugh. Way to make a bad first impression. I icily informed him that our destination was the Upper West Side, and we got in the car.

There were many things that seemed off or went wrong on this ride, so I’ll just number them:

1- I’ve taken a yellow taxi home from the airport many times, and every other time, almost as soon as we pull away from the curb, the driver will ask me for my exact destination/cross-streets. This guy did not, and we had to initiate that conversation a few minutes into the ride. Kaiti and I live about 5 minutes from each other (by car), so we gave him both destinations.

2- The taxi meter displayed “OFF” from the get-go. I saw it but didn’t think anything of it as I was very tired from traveling all day.

3- Kaiti noticed early on that he did not have a license/ID displayed in the car, which is very sketchy. Thus we don’t even know his name.

4- A few minutes after we got on the highway, he started muttering to himself and fiddling with the taxi meter/machine. It was down by his leg, so I couldn’t see what he was doing, but eventually he said to us that something was wrong, something about it being the end of his 10-hour shift, so the machine turned off, and he needed to restart it??

He then asked if we were paying by cash or card, to which I replied card. (I had enough cash but at this point didn’t want him to know I was carrying any…) He muttered something about having to take us back to the airport if the thing wouldn’t work, which was annoying because we really just wanted to get home! We passed by a Hilton hotel and I asked him if he could just drop us off there so we could find another ride, but he said he could only take us back to the airport. Ok…??

He kept messing with the machine, only barely looking at the road, which felt extremely unsafe, as there were still a decent amount of traffic at that hour. Eventually he pulled off the highway to deal with the meter and stopped on the curb of a dark street. We were very confused and irritated at this point and repeatedly asked him to just take us back to the airport.

What a grossly inappropriate thing to say.
OBVIOUSLY WE WERE SCARED and on the verge of calling the police at this point!!! What a fucking psycho!

I snapped: “No, we’re just very tired and want to get home!”

At this point I started sharing my live location in our Whatsapp group chat with our other NYC girlfriends, two of whom were still awake, thankfully. I really thought there was a high possibility of us getting mugged or worse. 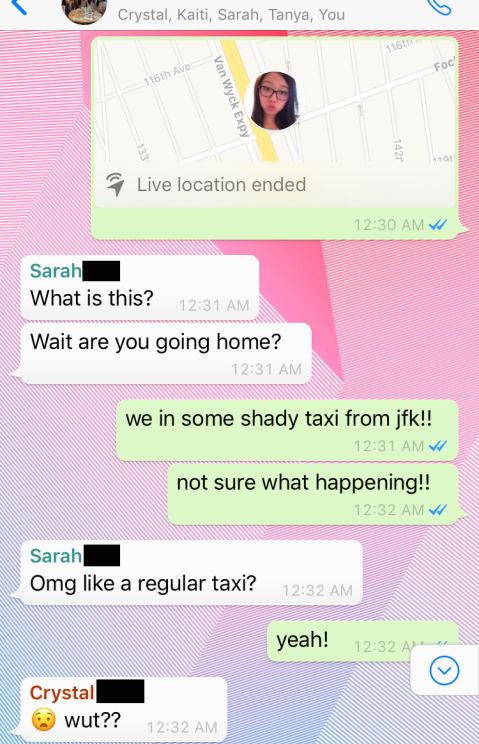 6- Finally, he started driving again, though we kept moving toward the city and not the airport. We asked what was going on, and he said he was restarting the meter and taking us to the city.

We were not even halfway to our destination yet, but he said that I would have to pay immediately when the meter booted up.

“Why??” I asked.
“You have to pay now!” he demanded. “Otherwise if you wait until we get to the city it won’t go through!” (Or something like that, I really couldn’t understand what he was getting at.)

We argued for a minute but I didn’t want to make him angry, so I took my credit card out and paid. Fine. Even though it made no sense for us to prepay for our trip. Our friends surmised that he was afraid of passengers running without paying the fare, but we had two large suitcases in the trunk, so…where the hell would we run off to???

7- On the final screen, the machine wouldn’t let me complete the process without inputting a tip, so I added $1.

When he saw the payment with $1 tip on his end, he got mad again and started calling me “disrespectful” and saying that I should delete it, he didn’t want to see it, etc.

Um, WHY WOULD I TIP YOU ANY AMOUNT before you take us to our destination??!? He had been nothing but unprofessional — it’s his own fucking fault he didn’t notice his machine was turned off before starting the ride! Maybe if he hadn’t been so busy hanging out with his friends at the airport he would’ve noticed???

I replied that since the ride would be split into two fares (flat fee from JFK, then the ride from Kaiti’s place to mine would be a separate fare; we did the same thing after our Hawaii trip), I would just make up the tip on the second ride.

He said that it wouldn’t work, something about the meter, I don’t know, and seemed to imply that he would just take us to both stops on the flat fee. So I told him I would just tip in cash later. He still seemed mad, and the rest of the ride continued in complete silence as Kaiti and I texted each other in the backseat.

Of course, we decided that neither of us should be in the car alone with this unsavory character. As we neared the Upper West Side, I directed him first to my apartment, which has a 24/7 doorman (just in case…).

Kaiti jumped out of the car immediately to grab our luggage. The driver didn’t move to help us, so I handed him a bit of cash (as promised) and told him that maybe he needed to go home and get some rest. Just trying to be kind, ya know. Despite everything.

As I was hauling my suitcase out of the trunk, he came out and asked us why we weren’t letting him make the second stop. LOL? You really think we’d want to spend another second in the car with you?! GTFO.

Thus ended the worst taxi ride I’ve ever taken. I’ve been in cabs that drove too fast and even got rear-ended in Taiwan, but this experience was beyond the pale, and I can promise that I am never taking a yellow cab in NYC again if I can help it.

In the morning, I submitted a complaint to the taxi commission (TLC). That guy (or whoever’s taxi he was driving) is not going to get away with this!

After not hearing anything for a month, I emailed the TLC in July to see if there had been any progress regarding my complaint, and they said someone was working on it.

Sometime in August or September, I got a call from a prosecuting attorney at the TLC, informing me that there was a hearing scheduled for October 7 and asking if I would be free to testify over the phone. Of course, I agreed right away.

Last week, someone else from the TLC called me to confirm my participation in today’s hearing. She said that there would be a 1.5-hour window for the driver to arrive at the hearing and make his case; if he didn’t show, then he would be automatically fined. If he did show, she would call me and review the details of my complaint, and then I would be dialed in to the hearing.

Well…I won this round. The morning passed without me receiving any calls, so I hope that guy pays his fine or just stays off the streets!

You are currently reading My Worst NYC Taxi Ride at auradis.