Death In The Family

My grandpa — 爷爷 — died this morning.

He was more than 90 years old, and his health had been declining for years. The most recent pictures I saw were of him lying in bed in some kind of hospice, curled up with his eyes tightly closed and a thin tube wrapped around his head going into his nose. He didn’t look comfortable.

My dad told me last month when he showed me the pictures that my grandpa was no longer able to eat or digest food, thus the feeding tube. 爷爷 wasn’t tall from what I remember, but he was still healthily hefty just a few years ago, but had wasted away to skin and bones.

He had dementia for the past number of years as well. He had started forgetting who we were even in 2008, the last time we went to China as a family. Grandma would admonish him to say hi to us. “Who?” he’d say. Dad would have to introduce himself. “It’s me; your son.” 爷爷 would smile and nod. “Ah, yes, good.”

I have a picture of him from when I visited Shenyang by myself in 2010, when he could still feed himself and get around slowly with his walker. “Sometimes grandpa remembers who I am … but usually not,” I wrote. 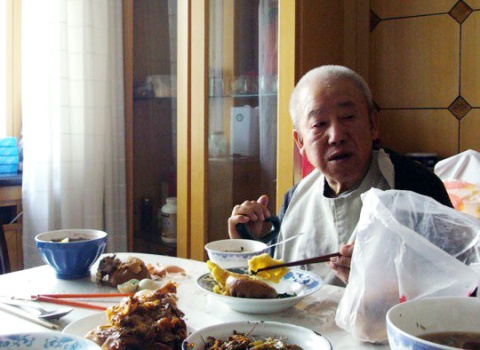 I don’t know much about my grandpa. I know he grew up in Shandong and always had a bit of that accent. I know he had four children: three girls and one boy (my father). I know he must’ve been a good parent because all of his children turned out to be wonderful, lovely and relatively successful in life.

I know that he and my grandma were my primary caretakers during the year that both my parents immigrated to the U.S., leaving my 2-year-old self behind. I have a fuzzy memory of him carrying me piggyback up the stairs of our old apartment building, though I can’t tell if it was in a dream or reality.

I know that my grandpa had dentures even 15 years ago, when my dad threatened that if I didn’t brush my teeth, they’d all fall out and I’d have to get fake ones and wouldn’t be able to taste food anymore, like grandpa. (The threat was ineffective.) I know that grandpa had a head of bushy white hair, and that if my dad hadn’t been self-dyeing for the past many years, his would be just as white. (Don’t tell anyone.)

The last time my grandparents stayed with us in the U.S. was when I was in middle school, but we didn’t talk much. So that’s really about all I know. And now — he’s gone. You could say he’s been gone for a while already, but now it’s truly final.

The thought of someone suddenly being gone forever freaks me out. I’ve been fortunate to have not experienced the deaths of any close relatives or friends.

My mother’s parents are already deceased: my grandma of lung cancer when I was 2 and my grandpa when I was around 10(?).

I never really thought about their deaths much, as I was too young and/or far away to appreciate the significance. But now that I think about it, my mother was only a few years older than I am now when she lost hers. It’s almost an impossible thought. I’m not that close with my parents, but I at least expect them to be there — not even necessarily when I need them (which is infrequent) but just to know that they’re there and doing well.

I’ve written about my grandma before, briefly. By all accounts, she was a kind person. I wonder if my mother would’ve been different as a parent if her own mother had still been around. I wonder if they were close. She didn’t talk about either of my grandparents much, at least not to me.

I’m sure my dad has been preparing for this day for a while. He sounded relatively normal on the phone when he broke the news, and thankfully his mother is still doing just fine. My parents were actually planning to go to China at the end of this month, but 爷爷 wasn’t able to make it until then, so they’re is flying out tonight. I hope to visit sometime next year.

And so it goes. Death takes its course, and the living stay behind, left to carry on while trying to make sense of it all in rambling blog posts. 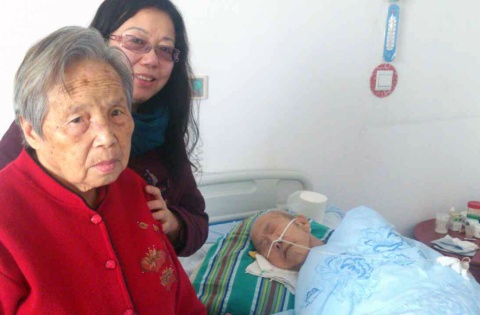 You are currently reading Death In The Family at auradis.