I Vont To Suck

Anybody who knows me well should know that I still enjoy watching children’s movies — for example, Wreck-It Ralph was one of my favorite films of 2012. So last fall, when a trio of horror-based animated films came out, I ranked them in the order I wanted to see them the most:

ParaNorman, as I expected, was clever and thrilling and even a little bit disturbing, which is what I liked so much about its predecessor Coraline (one of my favorite movies). I decided not to watch Frankenweenie after reading some “meh” reviews and watching Tim Burton’s original live-action short film.

Yesterday, due to the impending doom of snowstorm Nemo, I settled in at home to watch Hotel Transylvania. It seemed like an interesting twist on the usual fare. Monsters that are afraid of us? Ha! A human accidentally infiltrating their midst? Haha! Sounds like there’s a lot of humorous material to work with. 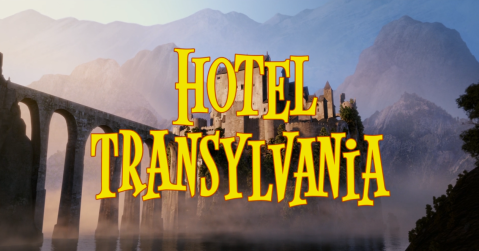 Sadly, it was mostly a disappointment.

I think my displeasure is partially due to the fact that if I already know I want to watch a certain movie, I immediately cease consuming anything that might spoil it for me, including additional trailers or reviews (unless the reviews say that it’s really bad). I mean, you can only see a scene for the first time once, right? Why would I want to watch even two seconds of an epic alien vs. robot fight on my laptop when I know I’m going to see it on the big screen later? Thus, I only saw the first trailer for Hotel Transylvania and missed the one that actually detailed the plot:

If you watch the trailer above, you’ll see that the film is based on the cliché of a father trying to protect his daughter from growing up and moving out and falling in love, etc. Seriously, that’s the best they could come up with? Gag.

It starts off cutely, showing Count Dracula as a doting father to his only child, Mavis, after his wife was killed by an angry mob. He builds an entirely new and remote castle supposedly to provide refuge for all monsters, but mostly just to keep his daughter safe, and he feeds her exaggerated lies about how terrifying and evil humans are. I’m getting strong Rapunzel/Sleeping Beauty/Little Mermaid vibes. While it’s understandable that Dracula is going to be scarred from losing his wife, it has literally been 118 years, and he can’t hold his daughter hostage to his grief forever.

I hate the cliché that daughters must be protected from the big, bad outside world. It’s all children that need protection, not just girls. All children need to be protected from things like guns and child molesters and obesity. What if the Count had a son instead? Are there any kids movies that so actively endorse the notion that male characters should just stay at home and be safe, instead of exploring and having adventures??

And Dracula isn’t just protecting Mavis from physical harm; he totally freaks out when he catches her kissing her human love interest. (Yes, she’s the one who makes the move.) 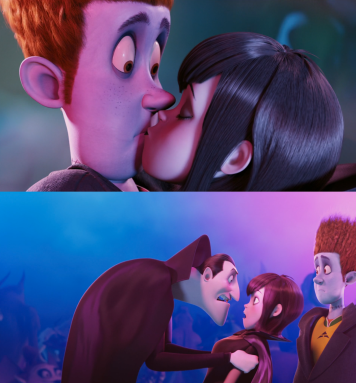 When did you start developing those feelings?! he rants. You were never interested in love before! Yup, he also slapped a chastity belt on her when she wasn’t looking. Comes with the castle! I cannot think of any kids movies in which the parents police their son’s purity. It boggles the mind.

The other female characters don’t fare so well, either. First of all, there aren’t that many, and their actual speaking lines are even fewer.

1. Mrs. Martha Dracula: Well, she dies. This couldn’t be more like a Disney movie if it was made by Disney itself.

2. Mrs. Eunice Frankenstein: The nag. She does nothing but yell about how humans are loud and annoying…in a loud and annoying voice. (The director should pat himself on the back for being so clever and ironic!) The first time we see her, she literally gets shoved into a box (by a male character) for nagging her husband. It was so alarmingly reminiscent of the Mr. and Mrs. Potato Head commercial.

3. Mrs. Wanda Werewolf: Barely speaks at all, just wanders in the background being pregnant. Completely defined by her role as a mother/wife.

4. Mrs. Skeleton: The punchline is that she’s naked all the time because she’s a skeleton! Har har! Jonathan the human accidentally creeps on her twice (e.g. when she’s showering), and both times, she is so busy being aghast that Mr. Skeleton has to chase the peeping tom away. Ughhh.

The men are portrayed as normal, fun-loving bros (even Dracula and Jonathan end up having a fun flying table chase scene) while the women are relegated to being mere accessories.

Eventually, (SPOILER ALERT) Mavis finds out the truth about her dad’s lies and Jonathan runs off, pretending to hate her (on dad’s orders). She opens the present that her mother left for her 118th birthday, and it’s a picture book about how Mr. and Mrs. Dracula fell in love. (Apparently, there was a “zing.”)

Really? A mother’s last gift to her child is the encouragement that she’ll find true love one day? Is there nothing more to life? Well, I guess not. Melancholy Mavis tells the Count that she wants her memory of Jonathan erased. “I have no more dreams,” she sighs, all desire to explore the world effectively extinguished. Then it’s father to the rescue again, and he braves the burning sunshine to chase down loverboy and bring him back. After that, finally, he grants his 118-year-old daughter permission — permission!! — to go live her life how she wants.

While the film does have its funny moments, I would never show it to my kids.

§ 5 Responses to I Vont To Suck

You are currently reading I Vont To Suck at auradis.