Not The End Of The World

I started hearing about the impending hurricane on Friday afternoon, when my editor warned that we might not be able to come into work the next week. I was intrigued, but not worried. On the map, my apartment was located in Zone C, making it unlikely that we would be forced to evacuate.

On Sunday, my roommate Catherine went out to stock up on food in preparation for the Frankenstorm. It took her two hours because the checkout lines extended from the front of the store all the way to the back. When I went out later, I saw that Trader Joe’s had a line to go inside the store, like it was Black Friday. Crazy. I stopped by the nearby Asian grocery store instead to buy some vegetables and cookies. The wind was already whipping down the street as runners squeezed in one last jog.

We spent Monday relaxing at home; I had some articles to work on but applied to jobs instead, which I suppose is better(?). I quickly ran out of cookies. Hurricane Sandy had landed, and I got tired of reading about it after the first three hours. Around 8PM, our lights started flickering. Then they went out. I was somewhat worried, but my laptop and phone were at full power, and I didn’t expect the blackout to last for more than a day or so. What I didn’t know at the time was that we lost electricity not due to a controlled outage, but to a massive explosion at Con Ed that would take way longer than a day to fix.

That night, I went to bed early and watched What To Expect When You’re Expecting (surprisingly funny, but I watched it solely for Chace Crawford, whose storyline was excruciatingly unrealistic and unentertaining) and Disney’s African Cats (cheesy narration/music but incredible footage), figuring that using up my laptop’s battery was fine since I couldn’t do anything else in the dark anyway.

The next morning, I woke up to the sounds of Catherine rushing around the living room while talking on the phone, and I learned that they now expected the power outage to last a week(!!!), and she was planning to head uptown to stay with a friend. I started getting alarmed and texted a few friends who live in New York to see how they were doing. I also called my aunt with hopes of staying with them for a while, but I couldn’t get through and concluded that they must’ve lost power in New Jersey as well.

Catherine cleared out with her daughter early Tuesday afternoon, kindly leaving me with some flashlights and a box of tea lights. All afternoon, I saw people walking around outside, and wondered what they were doing and where they were going. I, on the other hand, spent the whole day eating, reading and sleeping. Seriously, I took two naps and ate three meals in the span of nine hours. It was partly due to the fact that it was really cold in my apartment, and the only warm places were in my bed or by the stove. Fortunately, we still had running (cold) water and gas, so I could try to use up the perishables languishing in the dark fridge. I was incredibly bored and wished I had my GameBoy (an attempted solo game of Scrabble did not pan out as well as expected).

When the sunlight started fading, I lit 11 candles in my room (more matches than I’ve ever used in my entire life) and started reading some of Catherine’s daughter’s picture books because I had finished October’s Vanity Fair. One of the picture books, about a cat living a fabulous New York life, had the word “sexy” in it, as in her neighbor’s male cat had a “sexy smile.” I was really disturbed by the use of that word in a children’s book — I don’t think any child could or should understand the meaning of that word until they learn what sex actually is!

I was trying to conserve my phone’s power, but I briefly called B to have him check my school email for me and found out that class was canceled for the rest of the week. Things were getting serious, and I decided to relocate the next day. I had tired of reading my journalism books, so I picked out a book of short stories from Catherine’s extensive collection to read in bed: Zhang Jie‘s Love Must Not Be Forgotten (1979). The two stories I read were about lost love and kind of depressed me, so I went to sleep a little past midnight.

Despite having slept early and extra amounts the previous day, I woke up at noon on Wednesday. My cell phone signal had been iffy but viable for the past few days, but it was totally gone by the time I got out of bed. I planned to hang out at Esther’s for the day to recharge (and maybe shower…), so after eating a big lunch, I packed up my laptop and charger and headed out. It was 1:30PM.

Five hours later, I finally arrived at Esther’s apartment on 145th Street. Did it really take me that long to travel uptown from East Village to Harlem, a distance of merely 9 miles? (I could’ve driven from Chicago to Des Moines in that time!!) Yes. Yes, it did.

I started out walking north on 1st Avenue. Without any Internet access and with my phone’s power at one yellow bar, I figured I’d just improvise my way there. B had been saying that it was like I was living the show Revolution, and at that point, I truly felt like it. Faux-leather jacket, faux-leather boots, and all my important worldly belongings in hand as I trekked through what felt like a post-apocalyptic land toward a distant destination that was marked on a scrap of paper. (I was just missing the leather pants and crossbow.)

I wanted to take the M15 bus up to 126th, but each of the five buses that passed by were absolutely filled to capacity. I decided to walk up to 42nd and either find another bus or take the subway, as the streets north of 39th had power, and I had heard that there might be limited subway service. Well, that wasn’t the case, and I wandered west to 6th Avenue and then back east to 3rd Avenue to catch an M102 bus at 49th Street.

Forty-five minutes later, I got off at 52nd Street. That is not a typo. It took 45 minutes for the bus to travel three blocks. At that point it wasn’t a bus; it was a heated bench! I was peeved at the relentlessly gridlocked traffic in midtown, but it was nice to sit for a bit.

If I could just ctrl-z this whole week…

Normally when I have to travel more than five blocks, I rely on my iPod to ignore the crazies and perverts on the street, but I forewent music that day for the chance that I could overhear some important information regarding the Sandy aftermath. At the bus stop, I stood next to these three women, the loudest of whom was a small blonde lady in her early 60s who was wearing an extreme amount of mascara and eyeliner for a person of any age. She was clearly rich. They were waiting for the bus but also tried their luck at hailing a cab; when spurned by the off-duty cabbies, the blonde woman yelled “That’s not nice!” as I shook my head and wrote them off as typical loud-mouthed, slightly deranged New Yorkers. That’s the kind of noise I normally try to avoid by wearing earphones.

On the bus, I sat next to another older lady who was traveling uptown with her even older husband, who apparently recently had hip surgery and was being a bit stubborn about something or the other. “Men, right?” my neighbor remarked to the blonde woman, who was nearby. “Yeah, yeah, I know men,” she replied. “I just lost mine last month.”

My neighbor was immediately sympathetic. “Oh, no, I’m so sorry,” she said and grasped the hand of Ms. Blonde’s, who almost started crying as she related bits of her story. “It happened just up on 59th and Park…we were trying to hail a taxi, and he got hit…”

I had been sitting there, staring ahead blankly as their conversation passed over my head, but I slowly realized who she was. I had read about the accident in the news: a car collision had struck an older couple as they were trying to hail a cab, leaving the husband dead and the wife with slight injuries. I was struck. No longer was this woman just a random crazy lady — she was the victim of a horrible accident that killed her husband, and suddenly her highlights and makeup and loud voice appeared beautiful instead of garish. I felt humbled by our brief, indirect encounter.

After escaping the hopeless bus situation, I continued my march north as I tried to formulate a Plan B. Amazingly, after 10 blocks, the traffic magically disappeared, as if 62nd Street were a portal that spat out all the cars back to East Village in an endless looping gridlock.

The buses that I needed to take, M101/102/103, all ran north along 3rd Avenue, and every bus stop I passed had a line of people waiting. As I trekked up the next 45 blocks, I didn’t pass a single bus. That means that if I were to stop and try waiting for one, the next bus would be the one that I had ditched, which would probably take hours and be filled to the brim anyway. So I kept going.

By the time I reached 96th Street, I was feeling pretty light-headed from all the walking. I hopped on an M96 bus to go west and catch the M10 north, but a passerby said that the M10s were still stuck in midtown traffic. It was starting to get dark and cold, and I really didn’t want to add another 50 blocks to the day’s exercise regimen. Besides, I didn’t feel quite safe roaming around Harlem at night — I’ve heard stories about the place (namely, a friend got mugged right outside her apartment WTF)! I caved and hailed a cab, which deposited me three blocks away from my destination because the driver was in a rush to switch shifts with his partner. (He also made a detour to drop off the other passenger in the car.) WHATEVER.

I was about to give up on life when I finally reached Esther’s doorstep. She graciously nourished me with some Wi-Fi and green tea. And so, my dramatic little saga has ended for now, though apparently electricity won’t be restored until Saturday. I can’t wait to go home and deal with the garbage I forgot to take out when leaving…

Below is a map of my five-hour excursion: 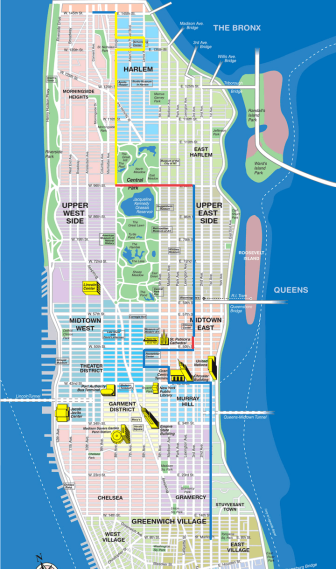 § 3 Responses to Not The End Of The World

You are currently reading Not The End Of The World at auradis.