Here’s To The Little Guys

The trailers for Captain America were enough to rouse my enthusiasm for yet another Marvel superhero movie. For starters, I am a total Chris Evans fan. His muscular physique and tender blue eyes framed by magnificently long eyelashes make him delightful to watch on the big screen, and he did not disappoint. However, the more I think about this movie, the less impressed I am by it.

As most should know, Evans starts out as a scrawny man cursed with the asthmatic body of a 14-year-old boy. I know that the first half of the movie was establishing his good character, but it was so pitiful. I found the grenade scene overdone and contrived. I suppose the biggest complaint is that Steve Rogers is too simple. He’s even less tortured than Superman, who’s as vanilla as they come. I know I shouldn’t expect too much from a movie like this, but that doesn’t keep me from desiring more.

Though some might disagree, I think that the movie got better [but not by too much] after the transformation. Evans’ pecs seriously rippled as he sprinted barefoot down the street — ladies, it was a delight. Still, the image of his digitalized, creepily puny self is hard to shake from my mind. I’m curious to see what his body double looks like.

I soon realized that despite being psyched to see this film, I really knew nothing about Captain America, his origin or abilities. And along those lines, I couldn’t tell if it was lazy writing or just being true to the comic, but what’s unfortunate is how tired and cliché the whole plot is, almost every aspect of it. Villain bent on taking over the world via some superhuman source of energy and ignoring the feeble moral protests of the scientists he exploited, the good guy doing typical good guy things like suddenly gaining super-intelligent tactical abilities…yawn.

Speaking of the villain, I really hate it when foreigners inexplicably speak heavily accented English. If it will add to the authenticity and believability of the movie, I would gladly just hear German and read subtitles. Although then I suppose the hero and villain wouldn’t really be able to communicate during the final battle. BUT STILL..! 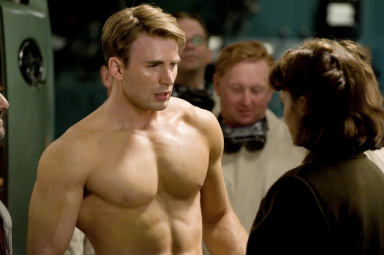 There are quite a few no-nose villains in theaters these days. [Lesson learned: If you don’t have a nose, you will not win!] I’m not sure why the serum made the villain’s skin loose enough to go parading around like Darth Maul, but it was weird. And his Hydra grunts look like they came straight out of Tron, with blue lasers and everything.

The explosion/takeover montage was like watching a video game trailer, and that’s not a compliment. As AC remarked to me after the movie, the editing in certain parts seemed rather poorly done. I suppose there aren’t that many options when your hero just punches people and flings his shield around, the action wasn’t that spectacular, and we even watched it in 3D. As is usually the case, I can’t say that the 3D was worth it. A second pair of glasses sitting awkwardly on the tip of my nose, my face muscles tensed to keep them from slipping off…

Kenneth Choi’s role was really something though. He had funny lines [or maybe it was just one]! He didn’t have to speak with an accent! And he didn’t even play the stereotypical nerdy or perverted or half-naked/insane character! It’s a veritable miracle for Asian Americans everywhere!

Despite my negative comments, I still enjoyed this movie, and the ending [plus the post-credits ending] was the perfect way to segue into next summer’s Avenger’s movie. There will be so many beautiful men on the screen I won’t know what to do with myself…somebody help me!

You are currently reading Here’s To The Little Guys at auradis.