The Family That Saves Together

The last time it felt like Christmas in my house was when I was in middle school: The morning sun shone into our living room as we gathered in front of the Christmas tree. I shrieked when I unwrapped the gift from my parents: 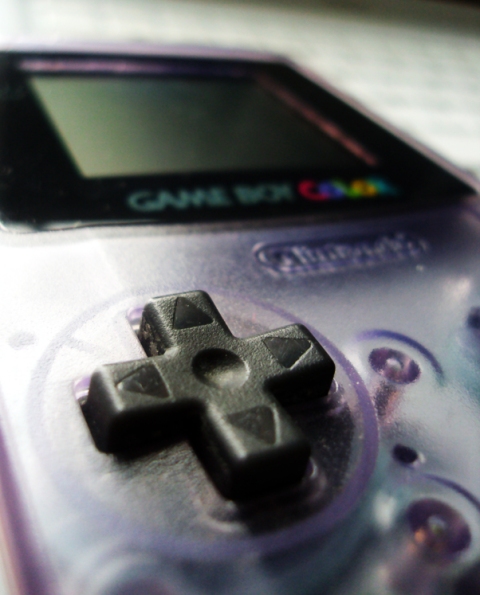 The other present, from “Santa,” was Pokémon Silver [how did he know?! Just kidding; I’m pretty sure I stopped believing in Santa by the age of 7]. At that point in time, my brother Larry was still young enough to be somewhat obedient and willingly join our family for pictures and stuff. After opening all our presents, my dad went to go put a Christmas CD into the stereo system, and we played contently with our new belongings as the sounds of a children’s choir echoed throughout the house.

Since then, many things have changed. We’ve spent Christmas at Disney World, at our new house; the past four years have been spent skiing in Wisconsin; I ordered my past two Christmas presents “from my parents” online for myself; we’ve become disillusioned with the enchanting idea of a cohesive family.

Yesterday, I started reading The Hundred Secret Senses by Amy Tan. I love reading her books not only for obvious reasons (she’s an amazing writer whose stories about Chinese-American women relate directly to me), but also because they always remind me that cherishing family is extremely difficult yet extremely important. And so I write.

This Christmas, I was awakened at 11AM by a heartwarming text from DP. I could’ve slept for another two hours, but I figured it would be rude to wake up so late on a holiday. When I peeked into the hallway, only Larry’s bedroom door was open; I could hear faint sounds of him playing Call of Duty downstairs. I tiptoed down to wish him a Merry Christmas and took it as a good sign that he didn’t respond with his usual “Shut up, fatty.” 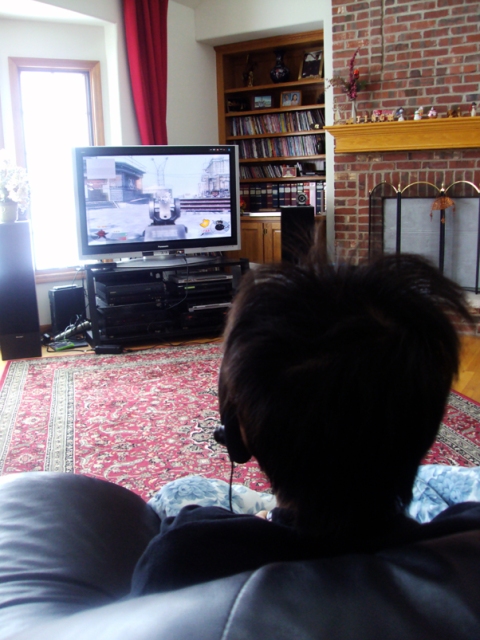 My mom came out of her room as I was entering the bathroom, and when I came back out, I could hear the rustling of tissue paper from the living room.
“Thanks, Laura,” she called up to me.
“Are you not going to wait for the rest of us?!” I responded loudly.
“Oh, sorry!”
Sigh.

I went down to the living room as Larry was examining his gift from our aunt in New Jersey; it was a navy blue American Eagle sweatshirt.
“I already have two navy blue sweatshirts without zippers,” he said. “And I don’t wear American Eagle…”

Our aunt had sent me a Christmas card containing $40, and I looked at it for a while, thinking. A week ago, our other aunt [the one who lives five minutes away] had slipped my brother and me a pair of red envelopes, each holding $200. The two of us were left agape, and he handed me his envelope to deal with. Later, I gave both of them to my mom.

The aunt who lives in New Jersey is a lawyer and lives in a million-dollar house with her family. The aunt who lives near us lives in a house smaller than ours, and she and her husband make much less money than the other aunt and her husband. I’m not sure if there are any implications deeper than one aunt probably loves us more [I say this objectively, without sarcasm], but it’s interesting to think about.

My mom did exactly as I suggested, and I took my $100 to the mall with LC on Monday to do some Christmas shopping. This past semester, I’ve helped upgrade the wardrobes of approximately three guy friends, which in turn helps me become more purposeful in my gift-giving.

I bought a thin belt for my mom. I tried buying her clothing once during high school, spending a whole hour agonizing over the racks at H&M only to have her return everything a few days later. Women are picky about their clothes, I know, so I didn’t take it personally but still felt somewhat crestfallen. Thankfully, there were no complaints about the belt.

I was going to buy a pair of dress pants for my dad because he has this awful pair of brown corduroys that he wears pulled up to his waist like my grandpa, but I didn’t know his pant size. I bought him a warm beanie instead, to replace the scruffy white one I’ve seen him wearing for years.

When he unwrapped the hat, I asked him how long he’s had his other one.
“Your mom gave it to me when we were dating,” he responded.

His words echoed in my head. “It’s THAT OLD?!” I said incredulously.
“Your mom had a matching one,” he reminisced. “It was blue with white stripes.”
“Actually, I think it was green,” my mom cut in.
“Her second sister made them for us,” dad continued.

I almost died. To think that my dad still owns and uses something from more than 20 years ago…it’s utterly amazing. 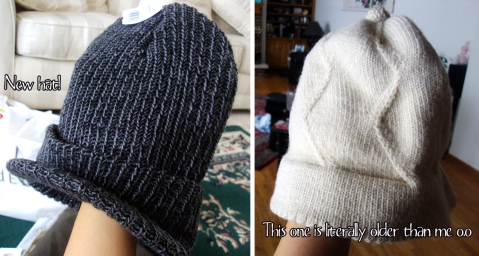 I guess my dad didn’t expect anyone to get him presents, because he bought himself a bag of stuff and left it by the side of the tree LOL. He seemed pretty pleased, even proud of his purchases as he pulled out the six t-shirts and two pants show me.
“Guess how much this one cost,” he said, holding up a Chicago Bears shirt.
“Did you go shopping with mom?” I responded.
“No,” he told me. “I went to the outlet mall in Pennsylvania on my business trip. This shirt cost less than $2!”

My mind was still reeling from the thought of my dad doing retail shopping by himself.
“Wait a minute,” I said suddenly, poking at his pile of clothes. “Did you buy two of the same shirt?”
“I bought three, actually,” he replied happily, showing me the other one. “I’m planning to replace my old t-shirts with these.”
I nodded, thinking about the raggedy shirt my dad currently sleeps in, which has holes at the seams.

When my mom had asked me what I wanted for Christmas, I replied “Nothing” [I already feel like enough of an unemployed burden], so that’s what I got. As a miracle upon miracles, Larry actually gave me something — Apples To Apples On The Go. Seriously unexpected, but it reminded me of the good old days when we played board games together instead of merely sharing the same Internet connection.

I think Larry also asked for nothing from my parents because that’s what he received too. I suppose it’s refreshing for a child not to pester his parents for an expensive Christmas gift, though they might be willing to pay that expense in order to have a son that gives respect instead of verbal abuse. When my dad took Larry to China over the summer, my relatives plastered him with birthday money, so the brand new XBox 360 & COD Black Ops that he plays was purchased with his own funds.

Larry seemed to like the two shirts I bought him from PacSun, but insists that he wears medium instead of small. UGH. He might still be growing [I mean, I hope so because he’s still shorter than me], but the progress is slow and size small clothing definitely fits him perfectly at the moment. I don’t want him to be another case of boy-who-never-wears-clothes-that-actually-fit!

After lunch, my dad and I made a sponge cake with the recipe he had enthusiastically obtained from someone at my aunt’s house last night. Both of my parents were awed by my ability to separate an egg yolk from an egg white LOL. 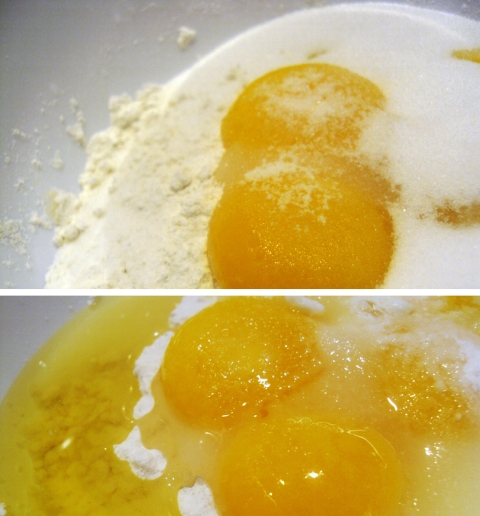 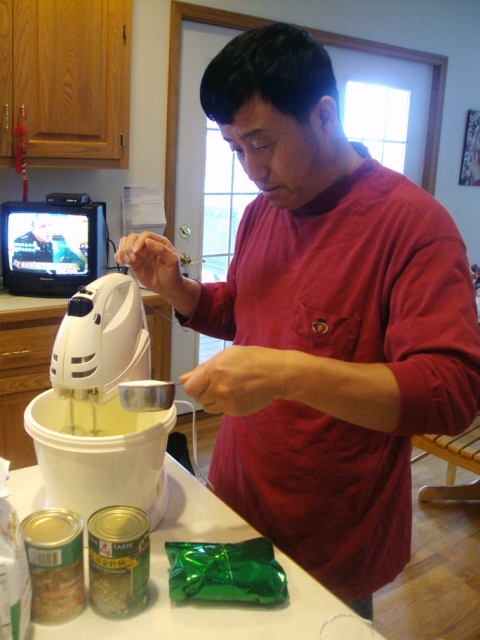 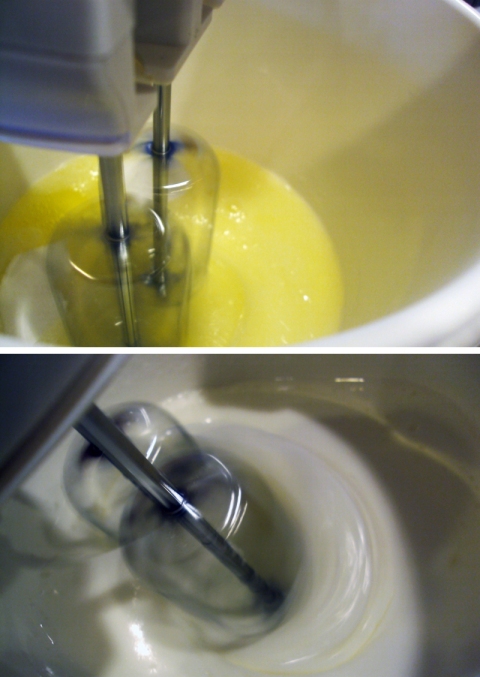 Whew…I spent all of yesterday writing this blog post. It’s filled with mostly daily minutia, but to me, any time I spend with my family that doesn’t involve fighting is worth recording. The closer I get to leaving this house, the more I have to cherish moments like these.

§ 3 Responses to The Family That Saves Together

You are currently reading The Family That Saves Together at auradis.