Airplanes In The Night Sky

Having walked through a multitude of different airports in the past year, I was bound to encounter surprises at some point.

1 For example, outside of both the Cebu and Yiwu airports are shady taxi drivers trying to coerce travelers into their vehicles. The ones in the Philippines were especially pushy, following us around to the ATM and the restaurant because the terminal was otherwise deserted at 4AM and because none of us were Filipino. Another astonishing circumstance about the Cebu City airport was that we had to pay a 550 peso [$11US] fee to leave the country after checking in. Thankfully we all had extra cash, but the demand was simply ridiculous.

2 The Shenzhen airport has free wi-fi instead of the fake free wi-fi that always gets my hopes up at O’Hare. I think it was the Seoul airport that had a mini station of laptops for free use but no electrical outlets for personal laptops.

3 While waiting in line for security check at Shenzhen, you can watch the flat-screen TVs hanging from the ceiling, which play random cheesy cartoons in what look amazingly like 3D graphics. Completely unexpected and fully awesome.

4 At either the SZ or Shenyang airport [I don’t remember], a worker was trying to direct the lines going through customs — one for Chinese citizens and one for foreigners. The foreigner line opened up, so I moved toward it. “Hey,” she called out to me. I ignored her.
“Stop,” she said more loudly and pointed to the “nationals” line. “You go in that other line!”
Irritated, I turned around and yelled “I’M A FOREIGNER” back at her. I felt weird making that declaration in Chinese on Chinese soil as a Chinese person.

5 As our bus left the SZ airport, it stopped at a gate; a guard boarded with a camcorder and solemnly recorded every passenger’s face before stepping back off. This happened both times I traveled from mainland China back to Hong Kong. I surmised a few different reasons for this custom…

6 Right when our plane landed in Shenyang, the Chinese tour group sitting a dozen rows in front of me began to stand up and fumble through their overhead bins. A few flight attendants zeroed in on the disobedient travelers and got them to sit down…temporarily. While the plane was still taxiing and immediately after the flight attendants returned to their seats in the back, the idiots were up again. I shook my head in disgust. Do they really need to be in that much of a hurry? Why are Chinese people so uncivilized in public? 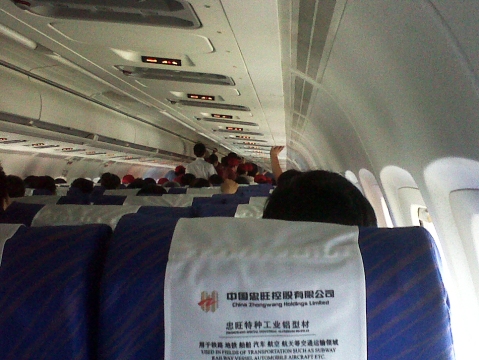 Those fools in the red caps need to SIT DOWN

7 On my way back from Shenyang, there was a baby howling for the last half hour of the flight. Parents should commit to not flying until the child can at least talk — poor thing was probably suffering plugged ears and didn’t know how to deal with it, and it was freaking annoying. Even my music couldn’t block it out completely, and the valiant efforts of the flight attendants did nothing. Do they make tranquilizers for infants? (…kidding. I wrote that in my Blackberry in the frustration of the moment.)

8 I brought four bottles of my favorite nail polish in my carry-on bag to Yiwu. In my state of utter exhaustion while packing, I figured they were each less than 3 ounces and so should pass through security just fine. They weren’t brought up at all in the SZ airport. I also paid an extra $10US there to have my duffel bag shipped with my big suitcase so I wouldn’t have to lug it around the airport.

Getting back from Yiwu was a completely different story. The lilliputian airport, which didn’t even open until 10AM, clearly had issues with overcompensation. I was leaving the city with the same amount of baggage that I came with, but the lady at the counter wouldn’t let me check in my duffel bag even when I offered to pay extra.
“Your suitcase is 19kg and your bag is 4, so that goes over your limit of 20kg.”
“But I was allowed to check in both on the flight here on the same airline,” I protested.
“Sorry for the inconvenience,” she responded unapologetically as she handed me my boarding pass.

I had thoughtlessly stuffed all my toiletries in there, so when I walked away from the counter in irritation and realized that I couldn’t bring all my shampoo and face lotion and body scrub with me onto the plane, my head almost exploded. But whatever. Those things are all replaceable.

What could NOT be replaced was my nail polish, which I had again crammed into my laptop bag. The security guy pulled them out and told me I couldn’t take them. I stood aghast, the blood draining from my head. Three of the four bottles were cheap, but the fourth one — my hot pink matte OPI — the most expensive bottle I had ever purchased at $10US — my newest bottle which I had used all of ONCE — the specific color I found only one time and NEVER AGAIN — I almost died.

“I can’t take even one?” I implored the old-ish man. He didn’t look like he wanted to torture me — he let me keep my sunscreen, after all, though he warned me not to take it out during the flight AS IF I WOULD — but he shook his head and stuffed them into a little drawer. Traumatized, I thanked him politely and cursed the stupid airport in the same breath.

NOBODY’S GOING TO BLOW UP YOUR STUPID LITTLE AIRPLANES FROM YOUR SILLY LITTLE AIRPORT, LEAST OF ALL WITH A DAMN EXPENSIVE BOTTLE OF MY FAVORITE NAIL POLISH.
It doesn’t seem like a big deal, but the memory still riles me.

9 I remember when Duty Free magazines were thick and fun to browse because they were full of useless junk like self-filling pet feeders and garden gnomes. Now they only contain cosmetics, jewelry and liquor. Did it grow up with me?

10 Some people damage or lose their phones permanently at least once a year. The only time I have been in danger of doing so was at the San Fransisco airport. While waiting for my next flight, I got up to go find something to eat. When I returned to the gate, a young man was sitting in my previous seat, using the outlet I had been using. I settled down in another row to munch on my scone.
I felt around for my phone to check the time and realized I didn’t have it anymore. Panic flooded me.
Lightheaded, I walked over to my former seat by the outlet. My Blackberry, in all its pink silicone-encased glory, sat innocently on the seat beside the guy. He looked up from his laptop and smiled at me as I swiftly grabbed my phone. “I was wondering whose it was.” I returned the smile and scurried back to my seat.

11 My flight from Seoul to Chicago consisted of a stop in San Fransisco as well as Denver. How exasperating, I thought as I looked over my three tickets at Incheon airport. I noticed that the first one looked a bit different:

Well, if you ever see this on your boarding pass, SUCKS TO BE YOU!

As the passengers filed down the tunnel to the aircraft, we were shepherded into two different lines, one labeled “first class” and another for everybody else. I observed the bustle of people getting their bags checked — a process I had never seen this late in the game; I mean, we were literally a few feet away from stepping on board.

I flashed my ticket stub to the attendant, who strangely directed me to the first class line. I started moving toward it when somebody pulled on my duffel bag from behind, stopping me in my tracks.
Bitch! I thought as I turned around and saw another attendant trying to drag me into the other line. She let me go when she saw my ticket.

To make a longer story short, SSSS basically means RANDOM FULL BODY SECURITY CHECK, with shoes off and bags open and everything. I had to ask to find out — I thought I was somehow superficially labeled as a potential terrorist.

12 This last story is my most shameful, and the one I never planned to tell anyone, so consider yourselves my confidantes.

I left Hong Kong with all my belongings: two large suitcases, a duffel and my computer bag. I was alone, the last person I saw being the Chen family’s Filipina maid, who kindly helped me to the shuttle bus from their apartment. It took me forever to find the second terminal where Thai Airlines was located in the HK airport, but my troubles didn’t end there.

I assumed that an international flight would allow me the luxury of two checked-in bags at 20kg each. But how many times have I learned that everything I assume is incorrect?
Each suitcase weighed a little more than 20kg on the conveyor belt at the check-in counter. I breathed a small sigh of relief and prepared to pay whatever minute fee there was for the smidgen of overweight baggaged. The check-in attendant did some calculations and looked up at me.

“There will be an extra charge of 1120HKD,” she said.
My jaw dropped. That’s about $150US.
Apparently Thai Airlines limits each passenger to 20kg total…

The shock floored me, but I had to pay up. What else could I do?? Resigned, I exchanged my stash of RMB for HKD at the currency counter, paid my fee, and tried to put it all behind me.

§ 8 Responses to Airplanes In The Night Sky

You are currently reading Airplanes In The Night Sky at auradis.