The Greatest Practical Joke, They Said

On a whim, I went to go see Watchmen last Friday with some friends. I figured that I could use a good action movie even though I had no idea what Watchmen was about; I had never heard of the comic before the movie.

The film was better than I expected, especially seeing as how I had no expectations at all. It was a relatively complex movie, full of ideas of romance, violence, politics and ethics. The opening montage was rather confusing, but the rest of the movie unfolded in an understandable manner.

One question I had dealt with the origin of this group of costumed vigilantes. Dr. Manhattan’s superpowered history was duly revealed, but I wasn’t clear on whether the others actually had some kind of superior physical powers or if they were simply really good at fighting. And Rorschach’s mask – how does it move? The last question is kind of irrelevent in a world where being trapped in a science experiment can turn one into a shiny blue demi-god, but still, I wondered.

The film featured occasional gratuitous violence that was so disturbing that I was forced to look away, but it’s not easy to forget the sounds of a man’s arms being sawed in half by a buzz-saw. There was also a semi-awkward sex scene, made bizarre by of the choice of music, although I was mostly uncomfortable because of who I was sitting next to. I didn’t know that the movie was rated R, and so did not anticipate either the gore or the naked flesh. 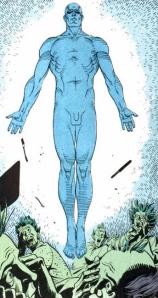 Speaking of naked flesh, I do believe this was the first time I have ever seen a penis on-screen, and it wasn’t even during a sex scene. I don’t know how the comics are drawn, but the film version of Dr. Manhattan was completely unabashed by his complete nudity, which was apparent for 90% of his on-screen appearances. It was a prosthetic piece, of course, considering the fact that actor Billy Crudup had to wear one of those special suits in front of a green-screen most of the time. I may be exposing my immaturity by admitting that I couldn’t look away from his groin whenever he showed up in a scene. I observed that it looked a lot bigger than other ones that I’ve seen [although if he had the chance to rebuild his body any way he wanted, why not enlarge it?], and also that I couldn’t see…the other 2/3 of the whole package. Hmm. Either way, bold of the movie. How many times have there been women shown completely naked in films? It’s about time there was some equivalence, heheh.

Another special effect that I appreciated was the aging of the characters. The film was composed of multiple flashbacks, which meant that most of the actors had to transform themselves into old, wrinkly or flabby characters for half of the movie. It reminded me of the Curious Case of Benjamin Button, although because everything in Benjamin Button is supposed to look real, the effects stood out as just that — effects. In Watchmen [and it was probably mostly just makeup, but I’m not certain], the added wrinkles looked quite authentic in comparison with everything else going on in the film.

I would also like to add that when some people wear purple, they totally OWN it. [Unfortunately, yours truly looks pretty terrible in that color.] Purple was pretty much Adrian’s thing, and I particularly liked this outfit:

Lastly, WHAT THE FREAK was up with President Nixon’s nose?!?! Was that thing for real?? KT and I couldn’t help but snicker every time we saw that thing. It reminds me of Matt Damon’s fake nose from Ocean’s 13…

§ 4 Responses to The Greatest Practical Joke, They Said

You are currently reading The Greatest Practical Joke, They Said at auradis.