Is It Stealing If It’s Already Stolen? 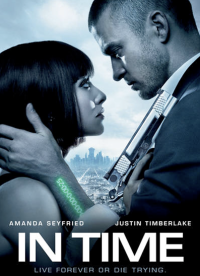 You literally only have those 2 options.

Yes. The answer in most cases is yes. Yet, Amanda Seyfried‘s character felt convicted enough about that question to have the gall to ask it at two different points during the movie. Unless you’re a superhero with a catchphrase, that’s not acceptable. Then again, she and Justin Timberlake‘s character pretty much thought of themselves as Robin-Hood-esque vigilantes, so I don’t doubt that she would’ve uttered that line more than twice if given the chance.

In the movie In Time, we’re dropped in the middle of this post-industrialized society where people have one year to live after turning 25, and they use their time as currency, dropping dead when the clock on their arm reaches zero. Apparently this is an attempt to fight overpopulation, though I guess I missed that part of the exposition. There are so many questions I had about this society: How could the beauty/anti-aging and pharmaceutical companies let this happen?? Who runs the government, and how the hell did they implement this universal biological clock? Have hospitals become obsolete because people [ostensibly] tend to die of being robbed of time as opposed to ailments from which they can be resuscitated? Did minorities get eradicated early on in this anti-population process? We’re thrown in with little context, but with movies like this, we’re just supposed to accept what we’re told to be reality. Just like when you’re playing Pokémon, it’s better not to ask questions.

For full disclosure, the reason I wanted to watch this movie because one of my favorite actors, Matt Bomer, is in it. Yes, he dies rather early on in the film [it’s not a spoiler if it happened in the trailer!], but seeing him on the big screen was like a dream come true. I almost fainted with glee. His character philosophizes about life and death before “timing himself out ” [ie. suicide], which opens Timberlake’s eyes to the injustice around him.

In fact, there’s quite a bit of philosophizing in this movie. It comes out at an opportune time because the similarities to the Occupy Wall Street movement are easy to draw. The In Time society is separated into “time zones,” and only those rich with time are allowed out of the ghetto and into New Greenwich, which is one of those words [like Newfoundland] that should just be pronounced the way it’s spelled. Naturally, all the poor people in the ghetto rob each other and are themselves robbed by the powerful few, who control the markets and get to live forever. [They are the 1%!!!] It’s not hard to see the undertaking of a political message, but the film takes itself so seriously that the audience occasionally laughed when we weren’t supposed to. Oops.

Also, immortality seems like a throwback to villains of my childhood. Maybe it’s because I don’t watch cartoons anymore, but does anybody really want to live forever anymore? 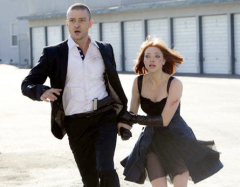 At some point during In Time, the movie jumps on the crazy train and derails itself. For example, Timberlake and Seyfried concoct the brilliant plan to rob a bank that magically leaves its vault open and uses no guards. They do this successfully multiple times. In fact, the only times they get caught are when they’re in the street and not brazenly stealing from a vault. They make a sexy Bonnie-and-Clyde-esque couple, but there’s very little substance to their relationship, so it ends up being cringe-inducing. [I wanted to die during the strip poker scene.]

And who else expected “fighting” to mean “intense arm-wrestling”??

Justin Timberlake: Is he just a good citizen for the hell of it? Why does he feel obligated to rescue Henry Hamilton? Why don’t we get to learn more about his father? The character development is lacking.
Best quote: “No one should be immortal if even one person has to die.” 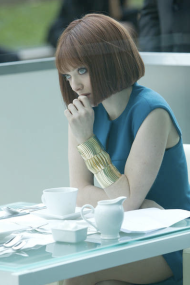 Amanda Seyfried:  She spends most of the movie in 5 inch heels, an impressive feat considering the sheer amount of sprinting she has to do. Kudos! Her character is introduced to us as a super creeper who just stares at Timberlake wordlessly from a distance for quite some time. It reminded me of Olivia Wilde‘s character from Tron. She’s reckless without much reason, and the way she falls for Timberlake after being held for ransom by him is nothing short of desperate.
Worst quote: “You talk like someone who comes from the ghetto. Sometimes I envy them.” Spoken like a truly out-of-touch 1%!

Cillian Murphy: His wardrobe, according to LC, comes straight out of The Matrix. I have to agree. I guess it’s always a challenge to dress these futuristic societies, eh? Somehow, I don’t expect knee-length leather jackets to come back in style at any point in the future, but I guess I could be wrong.

Vincent Kartheiser: As Amanda Seyfried’s father, he served his role as the insecure time tycoon very well. Maybe it’s because the villains get better material to work with, but his acting was the best, in my opinion.

Alex Pettyfer: I can’t believe he’s actually younger than me. Are minutemen like gangsters? Where do they get so much power? Do they work for the rich?

In the end, I’m glad that we don’t have to live like this — literally living day to day, with death looming as palpably as the green neon numbers on our arms. Writer/director Andrew Niccol is behind classics such as the Truman Show and Gattaca, but In Time isn’t his strongest work. He highlights a very real problem, but his solution is a bit too extreme and simplistic.

You are currently browsing entries tagged with In Time at auradis.