Patriotism In The Oven

For Fourth of July, I suddenly had the inclination to bake. This is something I do rather rarely, but I inexplicably wanted to make a marbled rainbow cake to bring to an evening BBQ. After a bit of inspiration, I decided to go with cupcakes. This is my first time really attempting making-food blogging, and I learned that it’s time-consuming to stop at every step to wipe my fingers clean and snap a photo or two.

Rather patriotic, don’t you think? Alas, it’s hard to find ideal lighting in our kitchen due to lack of sunlight…

The process started with mixing food coloring into the cake batter. I must’ve used at least 10 bowls with separate chopsticks, spoons and knives for each!

I also made a small batch of non-patriotic rainbow cupcakes, but because there were so few of them, I didn’t dissect one to photograph its insides.

I simply spooned the differently colored batters into the cupcake liners to form layers. It would’ve been easier to swirl & marble the layers if I was baking a cake, but the comparatively small cupcakes were too goopy and I was low on time, so I just left them as they were.

They looked so pretty and perfect after coming out of the oven! 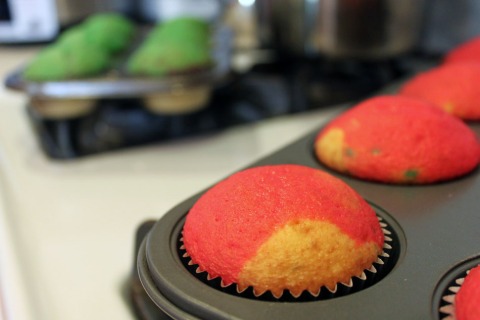 I also mixed food coloring into vanilla frosting. If I had more time, I would’ve added sprinkles and I would’ve arranged the cupcakes into an American flag design…maybe next time!

The blue batter turned out greener than I expected, but otherwise, the cupcakes turned out to be fantastic :) 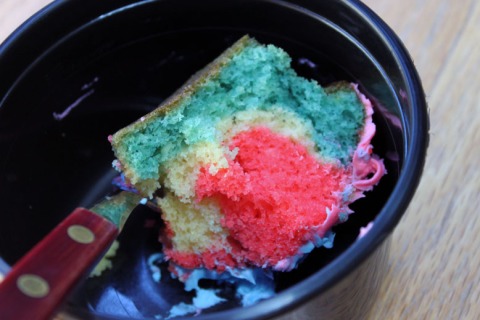 You are currently browsing entries tagged with holiday at auradis.