When I heard that Jaeson Ma was going to premiere his documentary 1040 in Hong Kong [sponsored by The Vine church], I jumped at the chance despite the event being two days away, one day before my final essay was due, and almost $40US to attend [funds for the new church building]. I’ve heard bits & pieces about him from friends and have watched clips from the film online, and I just knew I had to go. Unfortunately, because it was on a Tuesday night of finals week, none of my friends were willing to go with me.

The 1040 showing took place on Ma Wan island, an obscure little place that is half residential and half home to Noah’s Ark theme park, which is apparently the only to-scale replica of the Biblical vessel in the world. I took the ferry there without a problem and planned to follow the crowd to the auditorium, but once we arrived at the island, they all dispersed in different directions, leaving me in the middle of a plaza surrounded by apartment buildings. The people at 7-11 couldn’t tell me where Noah’s Ark Hall was located, and neither could the workers inside the bus terminal. After hearing about how strangers in Taiwan & Japan go out of their ways to help lost travelers, I’d have to rate the helpfulness of HK people as 3/10.

Anyway, it was dark by the time I finally found the minuscule signs pointing to Noah’s Ark. I was relieved to reach the mysterious location with five minutes to spare, but because people are SLOW, we started 35 minutes later than scheduled. It’s not like I’m bitter or anything about having even less time to work on that essay I haven’t started yet.

The medium-sized auditorium was full of English-speaking yuppies, mostly Cantonese but also with a smattering of white people, since The Vine has a healthy number of ex-pats. My $300HK ticket afforded me a seat in the middle section, and I duly noted that quite a few members of The Vine worship team could be found in the $500HK section closer to the front.

Pastor John started off the night with an introduction to the mission of the church, after which we got right into the movie. I kind of expected 1040 to be one of those tear-jerking pieces full of sacrifice and hardship [after all, it’s a documentary about Christianity. In Asia.], but it was more on the informative side. Of course, this doesn’t mean that it was a cut-and-dry infomercial — it’s an excellently edited film that showcases the movement for Christ in a few specific countries. Vanness Wu makes a briefer-than-I-expected appearance to talk mainly about devoting his time to promoting abstinence, which was REALLY unexpected. “God is better than sex”? Definitely. But would I wear that on a t-shirt? Um…

The documentary alone was not worth the entrance fee: I came to see the man himself. But first, MC Jin took to the stage and gave a short testimony about how he didn’t really learn to live out his faith until moving to Hong Kong — I’ve never listened to his music, but apparently he’s actually an active member of The Vine church! My easily starstruck ears perked up a bit after discovering that. 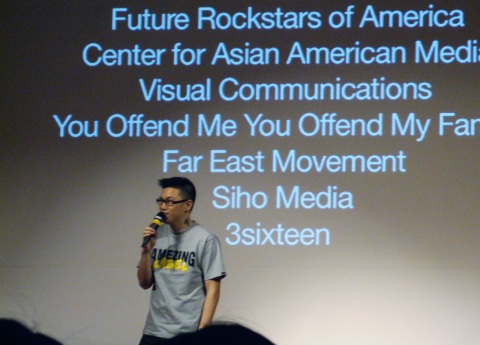 Finally, Jaeson Ma made his appearance and talked about the purpose of 1040. The man is riotously funny and does a hilarious Asian accent. At one point he asked, “How many of you out there are Asian-American?” I waved my hand proudly, forgetting that I was in Hong Kong, and was surprised for a moment when I only saw a couple of other hands raised. “Growing up Asian-American,” Jaeson continued, “you either want to be a Twinkie…or a chocolate-covered banana.” LOL. [“What is a Twinkie?” the Cantonese translator next to him asked.]

I got chills hearing him talk about God’s mission for him to raise an army of young Asian people. The churches in China believe it’s their mission to bring the Gospel to the remaining non-Christian strongholds all the way to Jerusalem, and Jaeson is working tirelessly to advance that movement. At the end of the night, he performed his amazing song “Love,” the recording of which I’ve been trying to upload on Facebook to no avail BECAUSE FACEBOOK UPLOADER SUCKS. [Okay it’s finally up.]

The event, which was supposed to begin at 7:30, ended at around 10:48, and I rushed out to catch the 11PM ferry back to Hong Kong Island. Despite being able to navigate around HK relatively well by now, I still don’t know my way around Central. I made my way to IFC mall, which has a bus depot on the ground floor, but I didn’t know how to get there. The [rather useless] concierge directed me across the street to the minibuses, which STOP RUNNING at 11:35 [let’s not go into how I would’ve made it if the 1040 event started ON TIME]. It was 11:45 by the time I reached the bus stop, so I walked down to where the big buses pick up passengers and hoped that the two buses still running to HKU would pass by soon.

I stood at the bus stop for 25 MINUTES like a fool, FMLing so hard while gathering more mosquito bites for my pre-summer collection. I had seen the 43X pass by on my way home from all-you-can-eat sushi on Sunday at midnight, but after almost half an hour, I was ready to give up. I told myself I’d wait until 12:10, and if the proper bus hadn’t turned up by then, I’d just take a taxi home. The bus supposedly only runs until 12:05, so I was losing hope rapidly.

You are currently browsing entries tagged with 1040 at auradis.